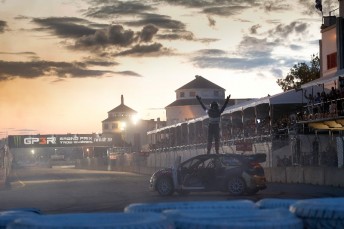 Petter Solberg has opened up a 20 point lead at the top of the FIA World Rallycross Championship standings after claiming a dominant win in Canada.

The former World Rally champion produced a lights-to-flag victory in the Trois-Rivieres final to become the only driver to win two events of the inaugural FIA World Rallycross Championship season.

Solberg’s Citroen DS3 topped the intermediate classification having set the fastest time in three of the four heats.

The Norwegian then confirmed his pace in the final as he blitzed the venue to win comfortably by 2.6s from Anton Markland’s Volkswagen.

The biggest surprise in the heats came from title contender Reinis Nitiss as he failed to qualify for the semi-finals.

However, the Lativian MSE Ford driver, who finished 13th, was given a reprieve as mechanical problems forced Joni Wiman out of the final 12.

There were no such problems for Solberg as he won the first semi-final from Timerzyanov and Toomas Heikkinen.

Canadian former IndyCar racer Patrick Carpentier gave the home crowd plenty to cheer about as he followed Marklund home to earn a spot in the final along with Nitiss.

Solberg led the final from the start as Marklund slotted into second ahead of Timerzyanov and Carpentier.

Carpentier took his joker lap first but a spin cost him dearly but there was worse to come as he crashed out after three laps.

Meanwhile, Solberg pumped in consistent lap times which allowed him to retain the lead after his joker lap.

In the end, Solberg took the chequered flag from Marklund and Timerzyanov.

Former Formula 1 world champion Jacques Villeneuve impressed in front of his home fans with his strongest run yet having held sixth spot after the first two heats. But a damaged fuel tank on his Albatec Racing Peugeot halted his charge forcing him out of the event after heat three.