Stuart Kostera and Garry Holt came through confusion to take victory in the Australian Manufacturers Championship’s Fight in the Night at Queensland Raceway.

The slated 65 lap night race provided plenty of drama at the Shannons Nationals meeting with a Safety Car mix-up causing confusion midway through the race.

Berric Lynton led the early stages in his Alphera Financial Services BMW 1 Series before losing the lead to the Mitsubishi Evo of Aaron Seton.

However, drama struck on lap 27 as Geoff Russell induced a lengthy Safety Car period when he suffered a brake failure at Turn 3.

The race resumed on lap 36 but racing was short-lived as an off from Lynton at Turn 3 saw the Safety Car deployed once again.

A race order mix-up behind the Safety Car, which had lost communications with Race Control, forced officials to bring the entire field into the pits under red flag conditions to determine the correct race order.

During this suspended race period teams were unable to touch the cars.

A new race distance of 72 laps was given but was quickly reduced to 59 laps due to time constraints.

Seton held the lead once racing eventually resumed but he was unable to hang on to take the win.

A late charge from the Kostera/Holt Evo saw the pair grab the lead in the closing stages, which they held onto to record their second Fight in the Night victory.

Seton came home in second ahead of the Kintyre Racing Audi TT of Matthew Cherry. 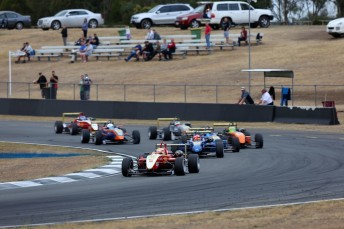 In the day’s other action, Ben Gersekowski cut Simon Hodge’s Formula 3 Australian Drivers Championship lead to 12 points after claiming victory in Race 1 of the weekend.

The McDonald’s Gilmour Racing driver made the most of a strong start as he fended off Hodge to take victory to boost his title hopes.

Hodge, who claimed pole by 0.040s, was unable to match Gersekowski’s lightening start as the McDonald’s car stormed to the front of the field.

Gersekowski quickly opened up a healthy advantage from Hodge as the pair moved away from Anthony and Winslow behind.

Hodge was able to close the gap to the leader to just under half a second at the halfway stage, but there proved to be no way through for the championship leader.

Despite coming under immense pressure, Gersekowski refused to buckle as he took the win from Hodge and Anthony with Garnet Patterson in fourth. 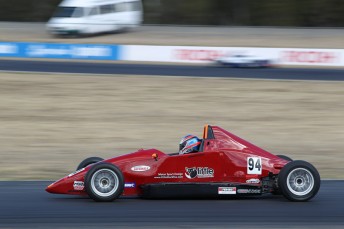 Jordan Lloyd on his way to victory in Australian Formula Ford

The Australian Formula Ford Series provided an edge of the seat thriller as Jordan Lloyd came from third on the grid to claim an impressive victory.

Pole-sitter Nick Rowe was slow away from the start which allowed James Golding to lead the field as they streamed into Turn 1.

Rowe moved into second with Hamish Hardeman third and Lloyd poised in fourth.

The top four soon became involved in a thrilling dice for the lead with the quartet swapping positions from corner to corner.

It was Lloyd who took the race by the scruff of the neck on lap seven as he surged into the lead with a well judged move at Turn 6 from Hardeman.

Lloyd was forced to deal with mounting pressure from behind but he stayed cool to take the win by two tenths of a second from Hardeman, Rowe and Golding.

Ryan Simpson came through an enthralling duel with Justin Ruggier to win the opening Kumho V8 Touring Car Series race of the weekend. 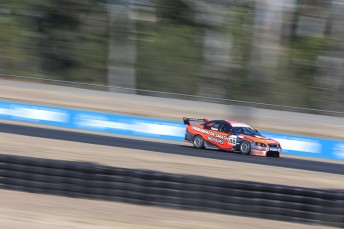 Ruggier, driving for Eggleston Motorsport, jumped into the lead at the start as he managed to sweep in front of Simpson on the run down to Turn 1.

The race developed into an entertaining tussle between Ruggier and Simpson with the latter making a successful move for the lead on lap eight.

Ruggier tried to fight back for the remainder of the race but he was unable to stop Simpson from talking the win.

Russell claimed the final place on the podium with a slick move on Chahda in the closing stages.

The former V8 Supercar racer, who set a qualifying lap record to secure pole, leapt away at the start leaving the Audi of Darren Hossack in his wake.

Hossack and the returning Aston Martin of Kerry Baily worked desperately hard to stay on the tail of the Alfa but Ricciardello proved to be too strong. Tony Ricciardello stormed to victory in the Kerrick Sports Sedans

In the end, Ricciardello continued his winning streak as he took the flag by 7.1 seconds from Hossack and Baily.

Kane Baxter-Smith came through a Safety Car interrupted race to win in the Dial Before You Dig Super Six Touring Car Series.