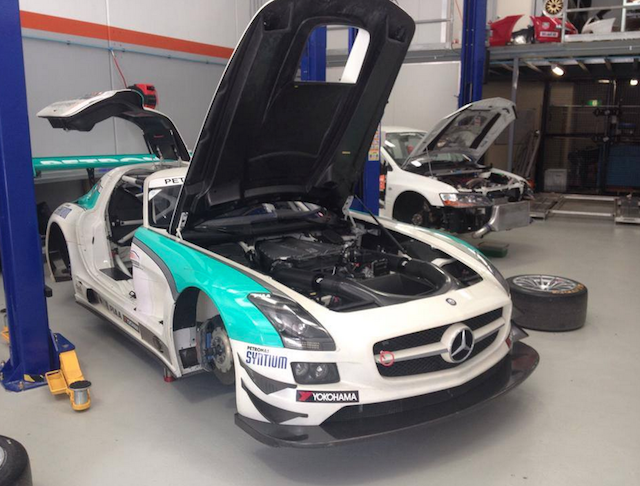 The ex-Petronas SLS has been purchased by Grant and Samadi

Garth Walden Racing has completed a successful shakedown of a freshly imported Mercedes-Benz SLS GT3 that it will campaign at next year’s Liqui-Moly Bathurst 12 Hour.

The car has been purchased by gentleman racers Dean Grant and Ash Samadi, who will be joined by Max Twigg for the Bathurst classic.

The 2013-build SLS was bought from Team Petronas, which completed just one race with the car – September’s Sepang 12 Hours – before the squad was disbanded.

Former V8 Supercars driver Walden, who established his own GWR preparation business in Western Sydney at the start of the year, travelled to Japan to finalise the purchase of the car in May.

GWR will run the Mercedes alongside Samadi’s Carrera Cup Porsche, the team’s Time Attack Mitsubishi Lancer and a fleet of nine Radical sportscars.

Grant and Samadi both drove the SLS for the first time at Sydney Motorsport Park on Thursday.

“It was our first shakedown of the car and it went really well,” Walden told Speedcafe.com.

“We were only on old tyres but both drivers loved it.

“It was a good systems check and an opportunity for everyone to get familiar with the car.”

Walden says that the ex-Petronas car will complete the 12 hour races at both Bathurst and Sepang next year.

Although focussing on the endurance events, appearances in the Australian GT Championship are not being ruled out.

“It’s not out of the question, but it’s still in the early stages of discussions,” he said.

The car will undertake several tests at Sydney Motorsport Park and Phillip Island prior to Bathurst.

At least four SLSs are now expected for February’s 12 Hour, with Erebus Motorsport’s two Australian based cars and a single entry from Germany’s HTP Motorsport all set to return. The Mercedes was shipped from its previous base in Japan