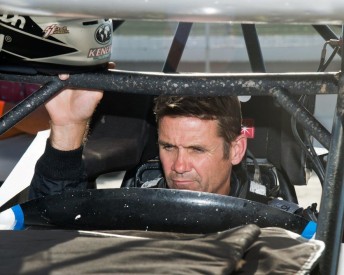 Kerry Madsen tops the Knoxville points after night one

Kerry Madsen got his FVP Knoxville Nationals campaign underway in the best possible manner in Iowa, ending the first night of competition atop the pointscore.

The points amassed by the Sydney-sider have almost assured him a front row start for Saturday night’s $150,000 main event. He holds a six point advantage over preliminary A-Main winner, Brian Brown.

Madsen set the second fastest time of the 56 cars that qualified, finished second in his heat and went on to finish third in the A-Main behind another of the fancied competitors in Brown and Sam Haftertepe Jr.

His brother Ian – who took out the Capitani Classic earlier in the week – finished 11th in the A-Main after winning his heat.

The other Australian in the field, James McFadden finished the A-Main 18th after finishing his heat fourth from the pole position. He qualified 40th.

The most victorious driver in Nationals history, Steve Kinser didn’t make the A-Main, finishing 12th in the last chance qualifier B-Main. Given the significance of his farewell tour in 2014, the Mayor of Knoxville has declared Saturday ‘Steve Kinser Day’ at the Nationals.

Lynton Jeffrey, Brooke Tatnell and Glen Saville will be in action tomorrow, along with defending Champion, Donny Schatz.

With the rain that abandoned the opening night 24 hours ago, and persistent rain throughout the day, some swift re-organisation from the Knoxville team saw tonight’s ‘night two’ run as planned.

Night one (rained out Wednesday competition) will now be held on Friday night Iowa time, with Friday’s program being held over until Saturday afternoon to create a double-header Saturday, culminating with the 54th running of the World Championship of Sprintcar racing.