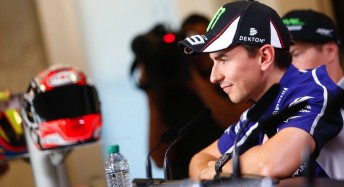 Jorge Lorenzo to stay at Yamaha for the next two years

The 27-year-old will remain at the Japanese manufacturer until the end of 2016 having finally confirmed his plans for next season.

The Spaniard has spent his entire MotoGP premier class career at Yamaha which has seen him record 31 race wins along with two world championships in 2010 and 2012.

“I am very happy to finally be able to make this announcement”, said Lorenzo.

“It is a relief to be able to now completely focus on the remainder of the 2014 season in the knowledge that our relationship will continue for the next two seasons.

“It has always been my wish to continue my career with Yamaha; I strongly believe we can fight for a third title together.

“This season has been very challenging after a difficult start, however we will continue to take it race by race, giving 100 percent until Valencia.”

The MotoGP campaign continues this weekend with the Grand Prix of Indianapolis.