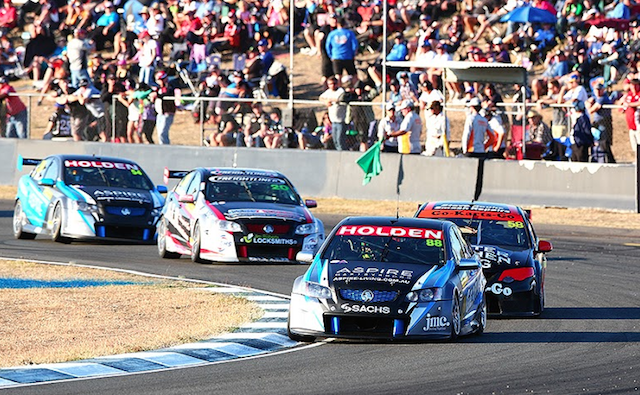 Dunlop Series leader Paul Dumbrell says the inclusion of a 250km race at Bathurst will have a major bearing on the outcome of the 2014 season.

The 31-year-old moved to the head of the standings by taking his second round win of the year at Queensland Raceway last weekend.

V8 Supercars announced late last month that the traditional twin 40 minute races at Mount Panorama have been canned in favour of the longer format.

The category is still sorting through details of the race’s co-diver and pitstop regulations, which are expected to be finalised by the end of the month.

Although several V8 Supercars Championship full-timers, including Dumbrell’s Pirtek Enduro Cup partner Jamie Whincup, have expressed interest to Speedcafe.com in doing the race, it is expected that the stars will be prohibited from competing.

Co-drivers racing in the Enduro Cup who have not completed at least three previous Dunlop rounds this year may also be banned, pending ongoing deliberations.

Minimum stationary times are meanwhile likely to be mandated for the pitstops, taking pressure off the Dunlop Series crews.

While the second-tier teams already have their own rattle guns for completing wheel changes, using the fuel rigs from the main series competitors is also thought a likely outcome.

Although still awaiting the final details, most of the Dunlop teams and drivers have embraced the concept.

“This is going to change the landscape of the championship,” Dumbrell told Speedcafe.com.

“I think is a step in the right direction for the series.

“In terms of co-drivers I seriously think most teams will go in with just one driver.

“When you think about it, the distance is just over one stint in the main game.”

Novocastrian Motorsport driver Aaren Russell, who came off a career best overall season result at Queensland Raceway with a maiden podium, also expects to do the race solo.

“We thought about having a co-driver with Drew my brother racing but its more beneficial for me to do it solo,” Russell said.

“If you want to race a V8 Supercar around Bathurst the distance of this is basically a stint so it’s of more benefit for me to do the whole race.

“I love the theory of it. I have no complaints about anything if I’m going to race in the main series one day.

“If we want to race in the main series and we want to do it seriously we’ve got to front up and do pit stops.

“I think its a step in the right direction. I think the series needs it especially for guys like myself who don’t have a lot of money.

“Things like this can help in your resume. If you do a good job you never know what can happen with the co-drivers.”

Ash Walsh, currently second in Dunlop Series standings in his Matt Stone Racing Falcon, welcomes the challenge of the longer race at Bathurst but cautions that driver eligibility must be closely scrutinised.

“You have to be careful about who you let into the race,” Walsh said.

“Some of the guys probably aren’t up to jumping into a 250km race in a V8 Supercar straight off.

“I also wouldn’t like to see the likes of the main game drivers jump in either, because then it’s hard for guys like myself to do well.

“If you see Jamie Whincup jump in with PD (Dumbrell) it’s not really fair, is it?”