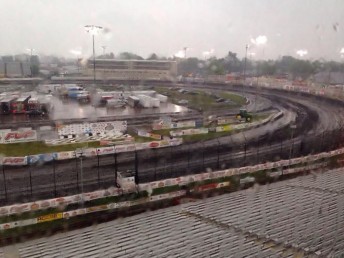 The first night of the FVP Knoxville Nationals has been rained out, with Thursday night (US time) scheduled to feature both nights of racing.

The scheduled Wednesday card will take place from 7pm Iowa time at the famed Fairground with the scheduled Thursday action due to begin from 11pm local time.

Of the 112 nominated cars, six Australians will take to the track this year, headlined by the Madsen brothers – who both took major event wins this week.

In the ‘Wednesday’ lineup, Brooke Tatnell, Lynton Jeffrey and Sydney’s Glen Saville will start their Knoxville campaign, whilst Kerry Madsen and Ian Madsen, along with young sensation, James McFadden are slated for Thursday.

After his victory in the King’s Royal and the Ironman 55, Kerry Madsen is one of the favourites to take the $150,000 winner’s cheque outright – but also to become the first Australian to stand on the podium.

Thousands of Australian race fans and industry members have made the annual pilgrimage to Knoxville for the event.