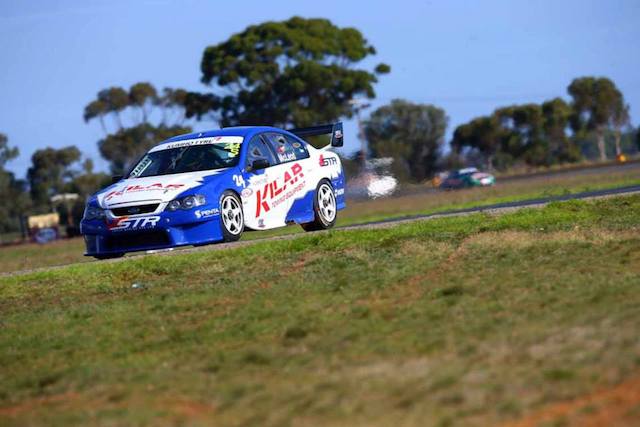 Former Dunlop Series mainstay Drew Russell will return to the wheel of a V8 Supercar this weekend as he makes his debut in the Kumho V8 Touring Car Series.

The 26-year-old has been given a late call-up to drive Matt Palmer’s second ex-Brad Jones Racing Falcon for the Queensland Raceway event.

The chassis was formerly campaigned by Russell in the Dunlop Series during the 2010 season.

Russell competed in the second-tier class for seven years from 2007, but stepped out of the series this year so that his family-run operation could concentrate its resources on Drew’s younger brother Aaren.

Drew had been on the Gold Coast this week preparing his brother’s car for the next round of the season at Bathurst when he got a surprise call from Palmer.

“It all came about fairly quickly and was very unexpected,” Russell told Speedcafe.com.

“I’m extremely lucky for this weekend that Matt and STR Truck Bodies have put me in the car just to really show what it can do.

“I think that if we can get the car right we can be reasonably quick.

“There’s a few quick guys in there but I’d like to think we can give them a good run for their money.”

Russell admits that watching Aaren score his podium last weekend brought with it “a little bit of frustration that I didn’t manage to do it myself”.

Although realistic on his chances, returning to the Dunlop Series full-time remains Drew’s goal for 2015.

“It’s something that’s on the radar and if we can find the budget then I definitely want to be back in there,” he said of returning in 2015.

“We could have tried to go around again this year and struggle through but I didn’t see a lot of point to it unless we were going to do it 100 percent properly and through dollars at it that we didn’t have.

“So the smartest thing was to kind of pool the resources into one car and essentially, for me, it’s been good to take home a pay check for the first time in my life (working primarily at the Russell family’s go-kart facilities).”

The Russell’s Dunlop Series Falcon moved from the family’s Newcastle base to Paul Morris Motorsport’s Gold Coast workshop prior to the Townsville round of the season.

Running the car alongside Morris’ own fellow ex-Triple Eight Falcon chassis has been a signifiant boost for the youngster’s chances.

“I think it has helped Aaren a lot to have a team-mate to bounce stuff off and provide a target,” said Drew.

“The guys at Paul Morris’ are great; the amount of experience and knowledge they’ve got far outweighs what we’ve ever done. It’s just great that Aaren can tap into that.”

Whether Drew will share the car with Aaren at the recently announced 250km Bathurst round of the Dunlop Series remains to be seen.

“We’re not sure at this stage,” said Russell.

“We’ve had initial discussions about it but until the rules are set in concrete and you can’t go through and really assess all the options, it’s too early to say.”

This weekend’s Kumho V8 Series round is expected to feature 11 cars.

Local driver Ryan Cochrane is another late addition to the field in an MW Motorsport Falcon.

The squad’s second car remains without a confirmed driver for the event, and is expected to be steered by team owner Matthew White during Friday practice.