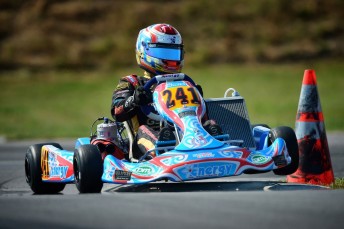 Juan Manuel Correa will make his first trip to Australia to compete at the Race of Stars
Pic: KSP

Karting top guns Simas Juodvirsis and Juan Manuel Correa will race at the 2014 Race of Stars powered by the V8 Superfest on the Gold Coast on October 18.

Juodvirsis, a past CIK-FIA European KZ2 champion and Correa, the 2013 Rotax Max Challenge grand final winner have been confirmed for the second annual staging of the event at the Xtreme Karting Complex.

The Race of Stars is an invitational karting event that sees more than 170 drivers drawn to the Gold Coast.

Having succeeded at the CIK-FIA European Championships and the SKUSA SuperNationals in Las Vegas during 2012, last year Juodvirsis won the DD2 class at the Rotax Max Challenge Grand Final in New Orleans.

Lithuanian Juodvirsis will run in the KZ2 class with the Energy Corse Australia team at the Race of Stars in his first visit to Australia.

“I am really excited about the opportunity to race in Australia. I have known Adam 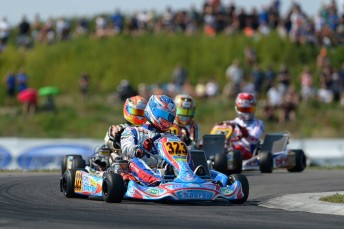 Graham (Australian Energy importer) for a few years now and we have always talked about me coming to Australia to race, now that we have finally managed to put to all together I can’t wait to get out there,” said Juodvirsis.

Correa, an Ecuador native who has spent much of his life living in Miami (US), secured the biggest win of his career last November at the Rotax Max Challenge Grand Finals in New Orleans.

The victory provided him with a springboard to compete in Europe, the spiritual home of karting, on a full-time basis throughout 2014.

Correa, 14, was also announced as a part of the Lotus F1 Junior Team earlier this year.