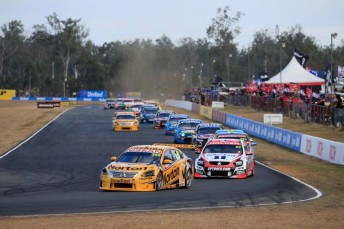 The Super Sprint format employed at eight V8 Supercars events this year has seen starkly different styles of racing across Saturdays and Sundays.

Outside of the high-degredation Barbagallo circuit, the twin 100km sprints on Saturdays feature no pitstops for the front-runners.

Without the opportunity to gain track position strategically, the flat-out, flag-to-flag fights have produced some of the season’s hardest, door-to-door racing.

Last weekend’s Coates Hire Ipswich 400 was a case in point, with Jamie Whincup taking team-mate Craig Lowndes for victory in the closing stages of the first heat, before the former benefitted from a clash between Michael Caruso and Scott McLaughlin to win the second encounter.

Sundays single 200km races are meanwhile dominated by strategy, with lead changes most often occurring in the pitstops.

Due to the 120 litre fuel drop requirement, each race sees two stops; the first of which occurs as soon as the opening lap.

The fact that teams can take on the 120 litres in different proportions across their two stops ensures that the true order is usually hidden until the second cycle is completed; often with less than a third of the race to go.

Tyre strategy also adds to the intrigue on Sundays as teams manage the remainder of their allocation from the weekend.

By completing just one run in Saturday’s first qualifying sessions, James Courtney was able to run greens down the working side of his car for the second and third stints on Sunday, giving the #22 Holden Racing Team entry a minor advantage.

Courtney ran second for much of the race before jumping Lowndes in the second round of stops.

Like the five 200km races that preceded it this season, Sunday’s encounter ran green for its duration, ensuring a significant field spread by the finish.