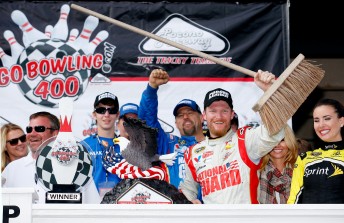 The brooms were out at Pocono

A final restart with just three laps to run saw Earnhardt Jr. out front and through to the chequered flag.

He is the third three-time race winner in the Sprint Cup Series this season, joining Jimmie Johnson and Brad Keselowski.

The 21st win of his career was also the first time since 2006 (Denny Hamlin) that a driver has scored the Pocono double.

“Just trying to hold those guys off at the end,” said Earnhardt Jr.

“They were faster and I was overdriving it there.

“Kevin was faster in (turns) 1 and 2 but I had the better car on the long straight.”

One of the big dramas came with a multicar wreck when Hamlin got sideways just after a re-start.

Fourteen cars in total were involved in the wreck including Matt Kenseth, Joey Logano and Tony Stewart.

Also out due to a crash was Jimmie Johnson.

Australia’s Marcos Ambrose finished 14th and is now looking ahead to the road course at Watkins Glen next weekend.

“If you had asked me at the start of the day would I take a top-15 finish, I would have said yes but it was just a little frustrating there at the end,” said Ambrose.

“We had some issues and I probably let a few spots go, but we’ll keep digging and keep working on it.

“It’s frustrating for all of us to not be as competitive at these downforce tracks as we want, but we’ve got a good one next week coming up and hopefully we can get rolling there.”