Pither spins after the contact from Waters while Johnson joins the accident. pic: Ian Ward

Waters made contact with the left-rear of Chris Pither’s Brad Jones Racing Holden during the early laps of Saturday’s race.

The touch, which occurred at Turn 4 as the pair disputed second place, spun Pither into the path of the chasing pack.

Steven Johnson joined Pither on the sidelines after coming unstuck in the ensuing carambolage, while Waters limped home 19th.

“Our car was very fast and I was pushing to take advantage of our early pace so I attempted to pass Pither and realised it wasn’t on, tried to back out but it was too late,” explained Waters after the incident.

“(It) wasn’t my intention but a costly error, and sorry to the other guys caught up in it.”

Johnson, competing in two Dunlop Series rounds in the lead-up to the Pirtek Enduro Cup, was particularly annoyed by the FPR driver’s move.

“He obviously can’t learn from his mistakes because he does it week in, week out,” said Johnson.

The penalty drops Waters from fifth to eighth in the series standings, now 348 points behind leader Ashley Walsh.

Round 5 of the Dunlop Series concludes with a second 29 lap race from 1355 this afternoon.

Morgan Haber will start from pole thanks to the reverse top 10 grid, with fellow Ford driver Marcus Zukanovic alongside. 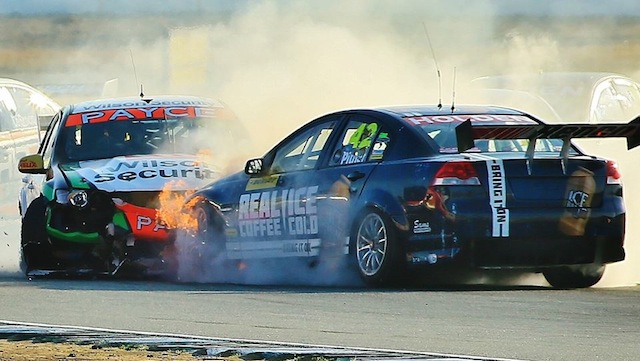 Pither and Johnson were both out on the spot. pic: Ian Ward