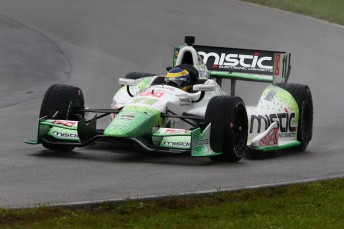 Sebastien Bourdais continued his late season resurgence by spearing to pole position for the Honda Indy 200 at the Mid-Ohio sports car course.

Hot on the heels of his Race 1 win at Toronto, KVSH Racing driver Bourdais prevailed in the Fast Six to Sarah Fisher Harman Racing’s Josef Newgarden.

Andretti Autosport pair Carlos Munoz and Ryan Hunter-Reay were fourth and fifth ahead of Penske’s Will Power who was sixth in the final stanza of qualifying.

Championship leader Helio Castroneves, who goes into the race with a 13-point lead over Power was 15th in the #3 Penske Chevrolet while Australia’s Ryan Briscoe (Chip Ganassi) will start from 19th.

“The last lap I knew I was shy and needed some more, so I just went for it and made it stick and that Mystic machine gave me everything it had,” Bourdais said.

Scott Dixon will start from last position after having his two fastest laps in Round 1 disallowed after spinning off the course which drew a red flag.

Meanwhile English driver Jack Harvey has claimed his maiden Indy Lights win in the opening leg of the double-header meeting for the second tier category at Mid-Ohio.

Harvey, 21, dominated the 30-lap race from pole to score by 17.3s over series leader Gabby Chaves.

Brabham had a battle with Veach early in the race before the third generation racer secured fourth however five laps from the end he experienced gear shift problems and subsequently dropped a position.

See below for qualifying results