Nissan cautious over upswing at Ipswich

Nissan cautious over upswing at Ipswich 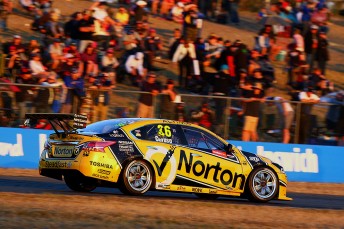 Nissan Motorsport remains guarded about the prospect of finding the solution to consistent pace after flirting with a much needed race victory at Queensland Raceway.

In Race 24, Norton Hornets driver Michael Caruso went for a dive-bomb pass inside Scott McLaughlin’s Volvo for the lead with 11 laps remaining, resulting in the former spinning out of the lead.

Caruso was eventually penalised over the move which saw him tumble down the order and finish 24th after qualifying second.

The speed of the Altimas was not confined to Caruso with Rick Kelly prevailing in the final 33-lap heat to finish fifth after a spirited fight with Ford star and championship leader Mark Winterbottom.

James Moffat, in the second of the Norton Hornets Altimas, also staged a rear-guard fightback to claim 13th after moving from the tail of the field.

The form comes on a circuit that the team expected to prove a struggle for its current package, which still lacks engine performance compared to its rivals.

“The promising pace was more to do with qualifying position than any developments on the car,” Sinclair told Speedcafe.com

“I don’t want to proclaim it as something as big as we’ve turned the corner but we are confident in what we are doing internally.

“We have got a good group of guys who are working well together.

“We know our deficiencies and we are working on them and we take full confidence in what’s coming.”

Caruso separately said that there had not been any changes to the car since the Townsville round at the start of July.

“We haven’t actually changed anything on the car from the last round to this round,” Caruso said.

“Its just a matter of where the car is in terms of set-up.”

Sinclair said that Queensland Raceway has traditionally been a circuit which favours front-runners.

“I’ve seen it plenty of times around here if you are at the front the car is naturally quick,” Sinclair said.

“We pulled a good gap and then once we caught Scott (McLaughlin) obviously the Triple Eight cars behind caught up.

“But our raw pace was quite good.

“We know we’ve got the driving talent to get the job done.

“And when we get the cars to the point we’re happy with that’s when we will be competitively consistently.”

“Where you qualify dictates the performance and bringing fuel economy into it will make a slightly difference to the outcome as well,” Sinclair said.

“I’d like to say we will be as competitive (as we were on Saturday) but it’s not as easy as that.”