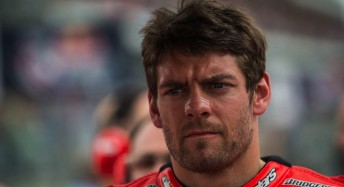 Cal Crutchlow has left Ducati to join LCR Honda for 2015

Cal Crutchlow will join LCR Honda for the 2015 MotoGP season after severing ties with Ducati.

Pramac Ducati rider Andrea Iannone will replace the British rider at the works team for the remainder of the season.

Crutchlow’s maiden season with Ducati has been blighted by issues with the former World Supersport champion recording four retirements from just eight races. He leaves the firm with a best finish of sixth from the season opener at Qatar.

“We want to thank Cal for his trust in our 2015 racing project and we are excited to line up with new team colours thanks to the cooperation with CWM,” said LCR Honda boss Lucio Cecchinello.

“In the mean time we will keep working hard to end the current season in the best way.”

The move has cast doubt over the future of current LCR Honda rider Stefan Bradl. The German joined the team in 2012 as Moto2 champion but has recorded just one podium in 43 races.

Bradl could be set for a move away from the squad with several reports in Europe linking him to seats at Pramac Ducati and Forward Yamaha.

The MotoGP season continues next weekend when the series heads to America for the Red Bull Indianapolis Grand Prix.