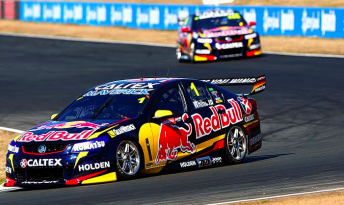 Whincup took another victory in Race 23

Jamie Whincup overcame team-mate Craig Lowndes to take his eighth race win of the season at the Coates Hire Ipswich 400.

Whincup stalked the pole-sitter for much of the 33 lap encounter before using superior tyre life to mount a challenge as the race entered its final third.

Triggered by a mistake from Lowndes at the exit of Turn 6, the Red Bull Holdens traded the lead for three consecutive corners before Whincup took the ascendancy for good.

The five-time champion was then able to pull away in the closing stages to win by 4.6s as Lowndes’ tyres faded.

“Our Achilles heel this year has been keeping the soft tyres on the car towards the end of the stint, so that was promising,” said Whincup post-race.

“It was a good battle with Lowndesey. There are no team orders, we raced it out hard and fair, so it was good.”

Added Lowndes: “We’ve obviously got good speed in the car but the longevity on the soft tyre isn’t as good as Jamie’s.

“I made a mistake onto the pit straight but then he ran wide (at Turn 1) so we swapped back.

“I knew he had good speed so I wasn’t going to fight into Turn 3.”

Scott McLaughlin started and finished third in his Volvo ahead of Fabian Coulthard, who also enjoyed a lonely race in his Brad Jones Holden.

James Courtney meanwhile held off a spirited late challenge from Mark Winterbottom to secure fifth for the Holden Racing Team.

Winterbottom, whose FPR Falcon showed typically strong tyre life throughout the 100km journey, took the place at Turn 1 on the final lap but could not hold off his rival into the following corner.

Will Davison greeted the flag on the tail of the factory Holden and Ford in seventh while Garth Tander, David Reynolds and Shane van Gisbergen completed the top 10.

Elsewhere, Chaz Mostert went in the opposite direction to team-mate Winterbottom in the closing stages, dropping six places to 14th across the final five laps.

Those to benefit included the Nissans of Rick Kelly (11th) and Michael Caruso (13th), who enjoyed starkly better fortunes than their two team-mates.

Todd Kelly ran 11th early before flat-spotting his tyres with a major lock-up.

Quickly dropping to the back, the former Bathurst winner eventually endured an off at Turn 2, pitted to replace a flat tyre and finished 24th.

James Moffat meanwhile battled for a spot deep in the top 20 until suffering a flat left-rear in the closing stages and retiring.

The Race 23 result sees Whincup close Winterbottom’s championship lead to 72 points, while Lowndes jumps from sixth in the order to third.

A second 100km race will take place later this afternoon, where McLaughlin and Caruso will share the front-row.