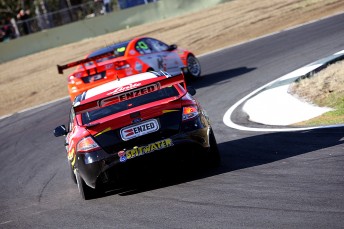 A last gasp effort from Cameron Waters earned him the Armor All pole position for the fifth round of the Dunlop Development Series at Queensland Raceway.

The Ford Performance Racing driver saved his best until the dying minutes of the session as he denied Eggleston Motorsport’s Paul Dumbrell from taking pole.

Dumbrell had topped the timesheets for the majority of the session only to be pipped by 0.0138s at the end of the 10 minute hit out.

Chris Pither will head up row two in third as he starred behind the wheel of of his Icebreak Racing Holden, while championship leader Ash Walsh, who topped Friday’s free practice, was fourth.

Steven Johnson will start Saturday’s 29 lap race from fifth on the grid just in front of Kiwi Andre Heimgartner.

Tim Blanchard on his V8 return was seventh despite suffering a brief off. The former Dick Johnson Racing driver will start ahead of Eggleston Motorsport’s Garry Jacobson.

Aaren Russell and Andrew Jones completed the top 10 with just half a second covering the group.