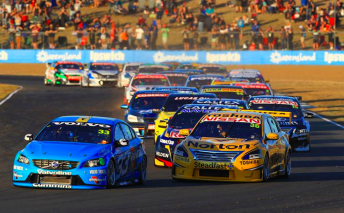 McLaughlin and Caruso would eventually collide while disputing the lead

Pole-sitter McLaughlin jumped away to an early lead while fellow front-row starter Caruso fought to hold out Whincup in the opening laps.

The Nissan proved to be the fastest car as the race unfolded, however, eventually reeling in the Volvo by the halfway mark of the 33 lap encounter.

Stalking his rival for several laps, Caruso eventually pulled a late dive with 11 laps to go at Turn 6; resulting in contact with the right-rear of the Volvo.

The hit saw McLaughlin spin while Caruso was handed a drive-through penalty.

Whincup, who had been closing on Caruso at the time of the incident, managed to hold out Lowndes over the remaining laps to record a narrow victory.

The result came despite multiple mechanical scares for Whincup, including engine problems in the closing stages.

The win is Whincup’s sixth in eight races and sees the five-time champion close Mark Winterbottom’s points lead to 48.

Chaz Mostert flew the Ford Performance Racing flag highest in Race 24, getting the better of Shane van Gisbergen in the closing stages to complete the podium.

Caruso apologised to the Volvo star immediately after the race, but said he had no regrets over attempting the move.

Qualifying and a 200km Race 25 will complete the Coates Hire Ipswich 400 on Sunday.