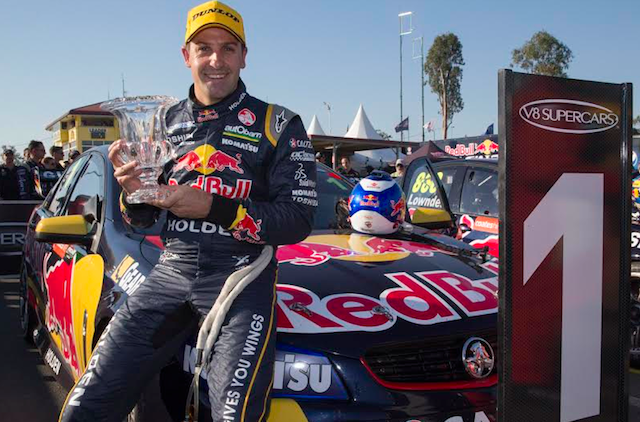 The 31-year-old made it a double victory on Saturday at the Coates Hire Ipswich 400 after inheriting the lead of the second race following a clash between Scott McLaughlin and Michael Caruso.

Narrowly holding out team-mate Craig Lowndes to the flag, Whincup later revealed that his engine had been cutting out during the closing stages.

“We had plenty of issues going on,” a relieved Whincup said post-race

“My engine kept fuelling up or something kept retarding itself a couple of times.

“I was pretty thankful that it kept going and we got to the end of the race.

“I think it’s timing. It just went all off-note,” he continued of the problem.

“I think it’s all electrical but I’m no engine guy, it just stopped making noise, so I’ll tell them to fix it for tomorrow.”

The issue had also been a cause of concern for Lowndes, who admitted to almost colliding with his team-mate on multiple occasions.

“I almost ran up the back of him a couple of times because I wasn’t sure what was going on,” Lowndes told Speedcafe.com.

“The boys said he had a flame-out and it wouldn’t happen again, but then it happened again out of Turn 4 and I almost ran up the back of him.”

The late-race scare followed pre-race drama that required the #1 Red Bull Holden’s brakes to be bled on the grid.

“I had a really dodgy pedal coming out of the pits, it felt like a DVS car,” Whincup explained.

“We gave the brakes a bleed and they came good, so they must have got a bit of air in them between the two races.

“You’re not supposed to take your wheels off (on the grid) but we got an exception to do that to bleed the brakes.

“They were fine after that, but we had the engine go, so we were very lucky to get to the end of the race with a few little issues going on there behind the scenes.”

Although declining to voice an opinion on who was at fault in the McLaughlin/Caruso clash that decided the race, Whincup admitted that his car had no answer for the Volvo and Nissan.

“The car was obviously good in the first race so we were able to control it, but we certainly didn’t have our own way in the last race,” said Whincup.

“Both the imports were flying out front there and we certainly didn’t have that pace.

“We feel pretty lucky that they tangled and we were able to stand on the top step of the podium.”

Whincup’s sixth victory in eight races closes him to within 48 points of Mark Winterbottom in the championship standings.

While Winterbottom spent his day fighting in the second half of the top 10 after more lacklustre qualifying performances, Whincup typically downplayed talk of his championship charge.

“I don’t like talking about the championship to be honest, particularly not this early,” he said.

“There’s still such a long way to go, especially with the enduros and 300 points up for grabs (in each race at Sandown and Bathurst).

“This part of the year is all about trying to go as hard as you can and win as many races as you can.

“I feel like we’re doing a good job but we are just trying to be in contention after the Gold Coast.

“If we are in contention then we will plan our run home, but at the moment, who knows what’s going to happen in the next three or four months?”