Lowndes, McLaughlin on pole for Races 23 and 24

Lowndes, McLaughlin on pole for Races 23 and 24 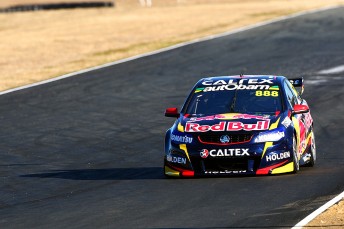 Craig Lowndes and Scott McLaughlin have blitzed the field to claim the prime starting spot for Races 23 and 24 of the Coates Hire Ipswich 400.

In the race for the Armor All pole position Lowndes scorched to the pole for Race 23 by posting a 1:09.42s overshadowing Red Bull team-mate Jamie Whincup by 0.04s.

It signalled a spirited fightback from Red Bull who claimed to be on the back foot after both drivers struggled in the three Friday practice sessions.

McLaughlin had briefly held second position before Whincup put in a late surge to force the Volvo driver back to third.

After a 10-minute break, qualifying for Race 24 saw McLaughlin spear to the pole ahead of Nissan Norton Hornets driver Michael Caruso with Whincup third.

McLaughlin had held sway at the top of the timesheets for much of the session before Whincup shoot to the top with less than a minute to go.

Lowndes had occupied second briefly before being shuffled back to fourth after the late surges from McLaughlin and Caruso.

McLaughlin managed to post a 1:09.29s, lap to find a .20s improvement in between his first and last flying runs.

Shane van Gisbergen put his Tekno Holden in fifth ahead of Rick Kelly who supplied Nissan with two runners in the top six as a mere .7s covered the 25 runners.