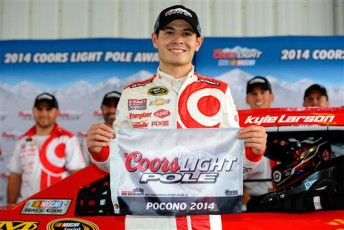 Kyle Larson with his first pole award in the Sprint Cup

Rookie Kyle Larson has scored his first NASCAR Sprint Cup pole award with the fastest time at the GoBowling.com 400 at Pocono.

Larson did start off the point earlier this year at Richmond, but that came after qualifying was washed out and times were set on practice speeds.

“I had some butterflies going into that last round,” said Larson.

“I knew we’d have a good shot at the pole after the second round and I was nervous. But I hit all three corners as good as I could, so I was excited about that.

“Everybody at the shop is making the cars faster and faster every week, and we’re getting better and better. I really think a win’s coming soon and that would be great before the Chase starts.”

Starting alongside will be Team Penske’s Joey Logano with another the Penske Ford of Brad Keselowski in third. Kurt Busch and Jeff Gordon round-out the top-5.

A handful of drivers eclipsed the former track record early on, topping the previous mark of 291.960km/h (181.415 mph) set by Denny Hamlin in June.

Several drivers had trouble in the opening 25-minute segment. Greg Biffle was penalised in the opening minutes of qualifying after a blend-line violation. Jimmie Johnson suffered the same fate in the final five minutes of the opening session. After serving his penalty, he returned to the track and eliminated Biffle from the top 24.

Carl Edwards scraped the Turn 2 wall and then bounced through the grass before hitting the access lane. He failed to make the 24-driver first cut as his team pushed the car back to the Sprint Cup garage for repairs.

Despite saying he was happy with the balance in his Ford, Australia’s Marcos Ambrose will start 27th.

“The downforce tracks have been a struggle for us at RPM all year and it continues here,” said Ambrose.

” I threw down some good laps there, so I’m pleased with my effort and we’ll just keep working really hard.

“We’ve got good balance on the car, which is normally a good sign for the race, but we’re just missing a couple tenths to get us to transfer through or it would have been a different story.”