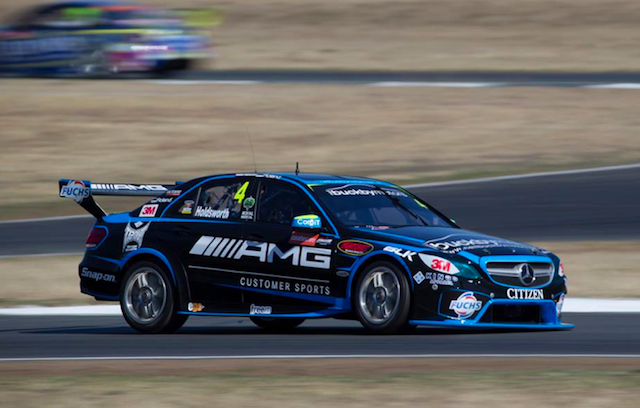 Erebus Motorsport CEO Ryan Maddison is confident that his team is closing on a fresh deal with AMG Customer Sports after recent meetings with the company’s chiefs in Europe.

Erebus also had general manager Barry Ryan, driver Richard Muscat and two of its mechanics embedded in the Black Falcon team for the weekend as it evaluates a possible Erebus assault on the race next year with its own GT operation.

Maddison’s main focus, however, is on reaching a new agreement with AMG and Mercedes-Benz Australia to extend its V8 Supercars contract beyond the end of the current season.

AMG and MBA are understood to have been working for some months on a revised agreement, which is yet to be turned over to Erebus.

Confirming that details have not yet been revealed to the team, Maddison told Speedcafe.com that the face-to-face talks were largely about “removing some of the speculation” that has surrounded Erebus this season.

The squad’s financial viability and future prospects have been under the public spotlight in recent times as its operates without primary commercial sponsorship.

“We’ve done a lot over the last two or three years using various methods of communication, but there’s no substitute for face-to-face (meetings), especially with the rumour and speculation that has been out there over the last few months,” Maddison told Speedcafe.com.

“The discussion is extremely positive and hopefully we’ll be able to have further commitment to exactly what our position looks like over the coming weeks.”

Maddison stressed that he is fully confident that a new agreement will be presented, shutting down any suggestion that the team could be cut loose.

“It (the meetings) confirmed again for us that it’s not a matter of if, it’s about what it’s going to look like,” he said.

“I don’t believe there’s an element of risk in there unless once we actually start going through the discussions there are points we can’t agree on. But I don’t see that being the case.”

While AMG completed the initial design, build and development of the Mercedes-Benz V8 Supercar engine and bodywork package under contract to Erebus, the team is now largely self sufficient, requiring only a limited engine parts supply from Germany.

Erebus has, however, made clear its desire for what Maddison describes as “an uplift” in its current relationship with both AMG and MBA.

The team’s hopes are understood to include forming a relationship with MBA’s dealer network, allowing Erebus access to cheaper original equipment panels, which are currently sourced through contact with individual dealers, as well as opening up corporate opportunities.

Erebus’ association with AMG took a step forward in June when it was granted permission to display the AMG Customer Sports branding on its V8 Supercars.

Although the signature is not an indicator of sponsorship, the team sees the association as important as it attempts to attract its own commercial partners.

“There are several factors to it, but until we know where it sits, the only thing I can confirm is that the discussions are really positive,” Maddison said of the team’s desired outcome.

Erebus’ second season has seen a marked improvement in its performances over 2013, when it spent much of the year sorting reliability issues.

It has brought a minor engine upgrade to Queensland Raceway this weekend, while Maddison is confident that further planned engine improvements are all that is needed to turn the squad into a consistent challenger.

The high level of investment in the 5.0 litre version of the AMG engine and homologated E63 body meanwhile ensures that Maddison is cool on recent talk from V8 Supercars CEO James Warburton that the category could be opened up to more engine configurations and body styles as soon as 2017.

“We’ve spoken loosely about the direction of the category,” said Maddison of discussions with AMG over the technical future of the championship.

“They are aware of some of the presentations that we as team owners are supplied as far as future strategies.

“Erebus right now have invested a lot in the current cars that we have so we obviously want to extract as much as we can from the existing package, rather than having to take on further investments.

“But at the end of the day from a manufacturers perspective it (a change in the formula) is probably more enticing.

“At the same time we’re in the entertainment industry, so there are some factors that need to be considered there.

“It needs to be driven by the public, to make sure that we haven’t got a product that’s moving away from being desirable to them.”

Erebus’ Will Davison topped two of the three practice sessions for the Coates Hire Ipswich 400 on Friday.

The first of two back-to-back qualifying sessions will get underway at 1125 local time today.