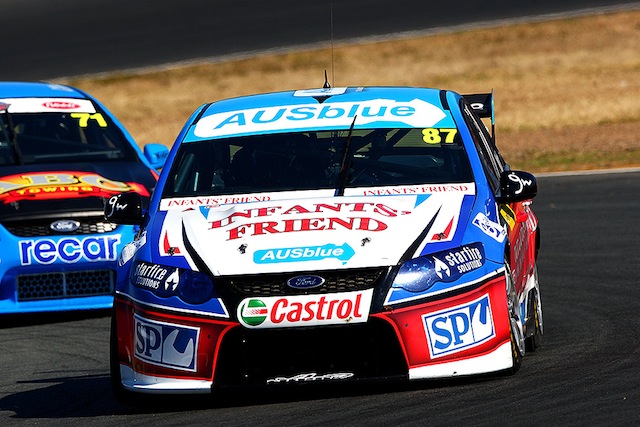 Ash Walsh proved to be the pacesetter in the Dunlop Series

The Ipswich native didn’t disappoint his home crowd as he topped the times in both 40 minute free practice sessions at Queensland Raceway.

Walsh ended the day with a personal best of 1.10.994s which was almost 0.3s clear of Eggleston Motorsport’s Paul Dumbrell.

“Practice has been pretty kind to us again today and we rolled out of the truck very well,” said Walsh of his day.

“We tuned the Infants’ Friend Falcon up continuously across both sessions and it seems all the changes are taking us in the right direction.“The track will change overnight and it will be cooler tomorrow morning so we will have to guess a little on the set up, but there is no reason why we can’t be fighting for a pole position.

“There are guys who can race very hard around me today so if qualifying pans out in a similar way I just have to keep my wits about me and make sure we do the job.”

Steven Johnson also impressed at his home circuit as he topped times towards the end of Practice 2.

In the end, he finished the day with the third best effort overall after setting a time good enough for 10th position in the first hit out.

Tim Blanchard wasted little time on his racing return for MW Motorsport as he ended the day in fifth behind Aaron Russell. Andrew Jones was sixth while United Racing’s Paul Morris was seventh.

The sessions were not with out incident as Ben Schoots and Josh Kean caused two red flags in the first session.

A spin for Dan Day at turn three caused a premature halt to the final free practice outing.

Meanwhile, in Aussie Racing Cars Trent Young claimed pole position for this weekend’s fourth round of the season.

James Duckworth had a lucky escape as a nasty gearbox malfunction brought out the red flags.

The Ferrari F430 GTS of Mark Griffiths secured pole position in the Production Sports Cars support category with a time of 1.14.4859s.

Ben Foessel trailed the Ferrari by two tenths of a second in his Porsche 911 and will subsequently join Griffiths on the front row. Scott Taylor was third with the Dodge Viper of Geoff Fane fourth.