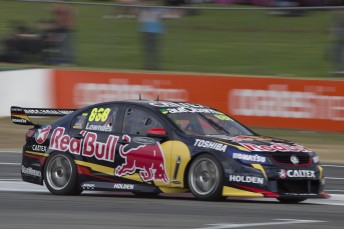 With less than 24 hours to place their tips for Round 8 of the V8 Supercars Championship players of the Castrol EDGE V8 Predictor are waging their bets on local knowledge at Queensland Raceway this weekend.

After a recent run of strong form Red Bull Racing Australia’s Jamie Whincup and Craig Lowndes are highly predicted heading to a track that doubles as their home and testing venue.

Lowndes has also won more V8 Supercar races at the circuit than any other driver with an impressive 11 to his name. He is also in race tune after competing and finishing on the podium at the Spa 24hr race in Belgium last week.

A surprise top-10 addition to the prediction statistics for the up coming round is another locally-based outfit in the way of Dick Johnson Racing. A prediction based on their 2013 effort which saw Chaz Mostert claim his maiden V8 Supercars win behind the wheel of a DJR Ford.

Mark Winterbottom currently leads the championship standings by 96 points over Whincup and is also highly placed among V8 predictors given his consistent year to date.

All the track action from the Coates Hire Ipswich 400 kicks off on Friday with three practice sessions. Two qualifying and two 100km races will be held on Saturday, followed by a 200km race on Sunday.

Queensland Raceway was quickly dubbed the ‘paperclip’ because of its six turn design and lack of elevation. It has been resurfaced in late 2011 and is the home test track to many cars in the 25 strong field.