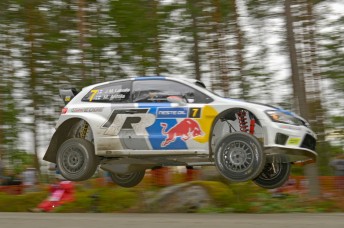 Latvala out front in Finland

Jari-Matti Latvala holds a small but handy lead after a damp opening day of Rally Finland.

The Finn heads Volkswagen team-mate and World Rally Championship leader Sebastien Ogier by 4.5-sec as he delighted the massive crowds both in and outside Jyväskylä winning three of the four stages contested in the first leg.

The rain negated the normal disadvantage of the leading runners being on the loose gravel and Latvala made the most of the opportunity. Ogier hit back winning the final stage on the streets of Jyväskylä.

Latvala’s only issue coming on the last corner of the day when he damaged the front right bumper on his Polo R.

“There was a chicane with a straw bale on the inside. I cut it too much and hit the bale, but it was nothing too serious,” said Latvala. 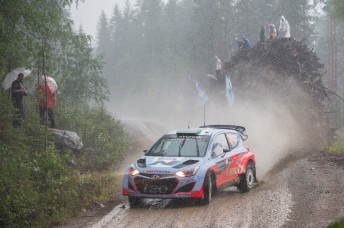 Citroen’s Kris Meeke is third, 9.2-sec behind Latvala, while Mikko Hirvonen (Ford Fiesta RS) is 26.4-sec from the lead in fourth.

Juho Hänninen (Hyundai) is fifth, Andreas Mikkelsen (VW) is sixth. While Mads Ostberg (Citroen) and Thierry Neuville (Hyundai) will both be looking to step-up the pace from tomorrow.

“This afternoon, in particular with our road position, that sudden rain storm that didn’t help and we lost quite a bit of time in the first stage,” said Paddon.

“But the second and third stages, when the weather cleared up, were an improvement and we’re a lot closer to our team-mates on times, which is where we want to be.”

A steady start for Australia’s Molly Taylor who sits 41st overall and right in the mix in her class.