Garth Tander will have a brand new chassis when the V8 Supercars Championship heads to Sydney Motorsport Park later this month as the Holden Racing Team continues its aggressive development push.

Walkinshaw Racing managing director Adrian Burgess tells Speedcafe.com that pressing a new chassis into service will help his team introduce a significant upgrade across all four of its entries as quickly as possible.

The latest upgrade will debut in one of the Walkinshaw cars this weekend, but could be in all four by the August 21-22 Sydney event.

“We’re going through a series of upgrades where a bit of work needs to be done on the chassis so it’s easier to give GT a new car for Sydney,” Burgess told Speedcafe.com.

“There will be a process of chassis either being updated or rotated so that we can get it on every car as quick as we can.

“For us it’s a step forward,” he added. “There’s not too much you can do (considering the chassis is a control item under the Next Generation rules) but there are a few areas that we fundamentally don’t like on the car and this is one of the areas that we’ve chosen to update.”

Burgess expects that a fresh car will be another boost for Tander, who has shown dramatically improved form over the most recent two events since a critical test day in early June.

“At the test day we identified something that car was doing differently to the others and we rectified it,” said Burgess.

“From the middle of that day onwards it was a step forward and now all of the comments from that car are more in line with those coming from the others.

“The set-up is migrating towards where the others are, rather than Garth being on his own, so I’m sure we’ve made progress across the board and definitely with that car.

“Giving GT a new chassis for Sydney is not going to hurt. Hopefully it’s another little present in his mind and it gets another half a tenth out of him there, just knowing he’s got something new.” 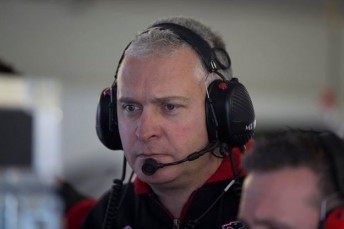 Burgess cancelled a scheduled pre-Queensland Raceway test so that his squad could continue working on the latest upgrades from its Melbourne workshop.

Its next test is locked in for pre-Sandown, while the third and final one of the season will either take place prior to Sydney Motorsport Park or directly ahead of Bathurst, pending the team’s progress.

The squad also has rookie days available to it courtesy of fourth driver Nick Percat.

Admitting that the punishing calendar in the first half of the season has challenged the aggressive development program, Burgess stresses that the team is determined to be putting its “best foot forward” by the championship’s crown jewell race at Bathurst in October.

“At the start of the year you’ve always got the best laid intentions and desires to do it all as quick as you can but we’ve got to be realistic,” he said of progress.

“The schedule (racing calendar) is very aggressive in the first part of the year so you never have as much time as you like.

“I’m very happy and very impressed with the work that the guys have done to bring lap time to the car but there’s still plenty more we’ve got on the agenda.

“The aim is to bring as many of those to the table before we do the enduros.

“The whole year is important but obviously Bathurst is a huge weekend, it’s our grand final, so we want to put our best foot forward there and go up with a real chance of winning that race.

“We’ll have a fair few updates between now and then which hopefully will improve our competitiveness.”

The former Triple Eight team leader says that the second year of the Next Generation rule package has seen a more focussed development approach from all teams, as well as an increased emphasis on engine performance.

“I think everybody this year has a better understanding of what this car needs, so you’re able to target your development in a more defined and precise area,” he said.

“Last year it was more about having a general understanding of the car’s dynamics and the implications of the tyre change. It was a much broader development cycle establishing the direction.

“Now people have the direction that suits them best and are going down their chosen direction in much more detail.

“We believe we’ve found the direction that we need to go in and we’re working fairly hard to get down that road as quickly as we can.

“Engine development is a key part as well,” he continued, noting the affects of the new partity system introduced earlier this year that saw V8 Supercars’ dyno test engines from all teams and inform them of their gap to the newly established benchmark.

“The accumulated power formula we’ve got highlighted how far some people were off the optimum.

“It’s probably refocussed a lot of people’s energies into that area because now there’s a finite end goal rather than an open-ended book.

“We’ve spent a lot of time and energy this year trying to improve our performance in that area and I think that we’re now a lot more competitive than what we were.

“We’re not the best out of everybody, so we’re still pushing. We’ll have one or two more (engine) updates for Ipswich that’ll continue that process.”

As for this weekend’s Coates Hire Ipswich 400, the Englishman is typically circumspect about predicting his team’s fortunes.

“It’s a difficult one coming here being Triple Eight and Tekno’s home track, but we’ll go into the weekend believing in all the philosophies that we have in place with our direction,” he said.

“The guys have done a lot of good work in the last couple of months, so hopefully we can continue that and come out of it with some silverware.

“But you can’t go there expecting any, you’ve got to go there and earn it.”