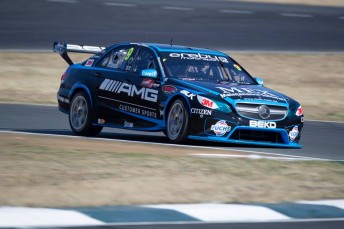 Will Davison was fastest in Practice 1

Will Davison topped the opening practice session of the Coates Hire Ipswich 400 at Queensland Raceway.

The Erebus Motorsport driver headed the times for the majority of the 20 minute session, posting a best just 0.013s quicker than Brad Jones Racing’s Jason Bright.

The Erebus team was one of four to test at Queensland Raceway last week and has brought a lightly revised engine package to the event.

Ford Performance Racing’s Mark Winterbottom was third fastest having briefly topped the times during the session.

Tekno Autosport’s Shane van Gisbergen was fifth quickest while Erebus Motorsport managed to get both their cars into the top six with Lee Holdsworth next in the order.

Scott Pye was seventh for Dick Johnson Racing at their home venue ahead of Nissan Motorsport’s Michael Caruso.

The Bottle-O Falcon of David Reynolds and Brad Jones Racing’s Fabian Coulthard rounded out the top 10.

The second of three 20 minute practice sessions for the V8 Supercars at Queensland Raceway will kick-off at 1315 local time.