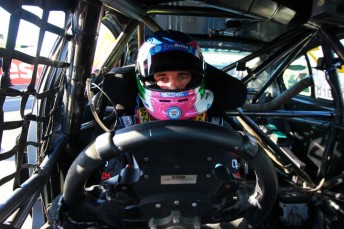 Tim Blanchard will return to the Dunlop Series this weekend

Tim Blanchard is back in the Dunlop Series this weekend as he closes on a seat in V8 Supercars’ Pirtek Enduro Cup.

The 27-year-old will drive MW Motorsport’s #27 Falcon that has been campaigned by Ryan Simpson, Steve Owen and Dean Fiore in earlier rounds.

Blanchard previously completed three Dunlop Series seasons, two of which came with MWM, prior to a single year in the V8 Supercars Championship with Dick Johnson Racing in 2013.

“It’s a pretty last minute thing that’s only come together in the last two or three days,” Blanchard told Speedcafe.com.

“We’re probably behind the eight-ball a little bit but it’s a good car and I’m just really looking forward to getting into it.

“In terms of personal performance hopefully I can get back to where I was last year and we’ll have a good weekend.”

The former Australian Formula Ford champion hopes that a deal could be struck as soon as this weekend.

“We’re obviously working on it and getting pretty close but nothing’s sorted,” said Blanchard.

“Hopefully this weekend we can try and sort something out.”

Blanchard added that he felt comfortable with both the Triple Eight-built Holden and the team at the Winton hit-out.

“I fitted in pretty well straight away,” he said.

“I’ve worked with Brendon (Hogan, engineer) before so it’s good to have that relationship.”

A 30 car field is entered for this weekend’s Dunlop Series round at Queensland Raceway.

Brett Hobson has meanwhile replaced Fredrik Lestrup in RSport’s second Holden, with the Swede citing a lack of budget as the primary reason for withdrawing from the remainder of the campaign.

“It has been my biggest challenge yet and a long term dream come true to race in Australia but unfortunately I have had to realize it’s no longer possible for me to continue,” he said.

“It has not been possible to raise the required budget to continue and this in addition to other commitments back home means I have had to end my Australian season earlier than planned.

“It’s been a tough but very enjoyable experience and we have been closer and closer every weekend to getting into the top 10 despite no testing and limited running.

“I have learnt a lot about driving these cars and have been encouraged by the progress we have been able to make.”