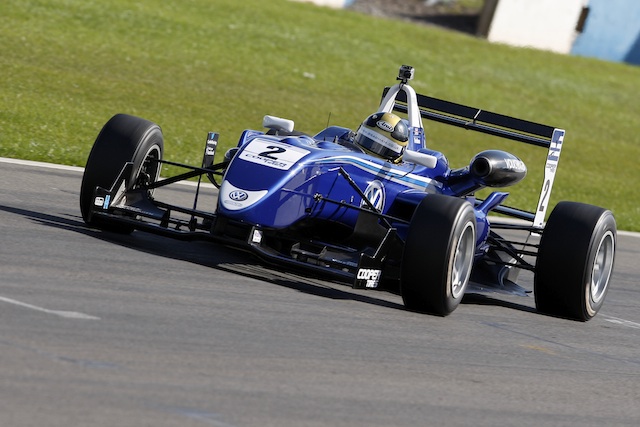 Third generation racer Sam Brabham says he is eyeing a move to Formula 3 next year as he looks to continue his rise through the junior ranks.

The 19-year-old son of Le Mans 24 Hours winner David Brabham has enjoyed a breakthrough season this year which has seen the teenager record two victories in the hard fought British Formula Ford Championship.

Although a nasty barrel roll crash at Oulton Park and impending budget constraints forced Brabham to miss the last round at Croft back in June, he is already progressing on plans for next year with F3 and Formula Renault emerging as preferred options.

Brabham has already tested an F3 car with the illustrious Carlin team at Donington Park in April and believes in an ideal world, the category is the next logical step in his career.

“I think having done two years in Formula Ford I think the next step is to move on,” Brabham told Speedcafe.com.

“The next step would be Formula Renault or Formula 3 and I will be keeping my options open.

“I think I preferred the F3 car to the Formula Ford as you can utilise the aero a bit more.

“In a F3 car you can use that aero so much more effectively.

“I really enjoyed it and in that car I had the biggest smile on my face. It was so well balanced.

“If you look at Max Verstappen and Esteban Ocon in FIA Formula 3 they are the next wave of stars. My target is to be in that position.

“You want people to respect you and prove you are worth investing in as it is impossible to  progress up the ranks without securing budget.”

Brabham returned to the race track two weeks ago as he raced alongside his father in the Radical SR3 Challenge at Snetterton. The pair picked up top five finishes including a podium.