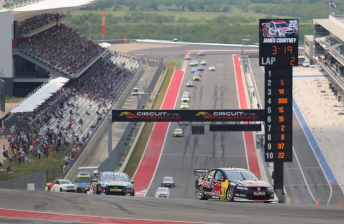 The V8 Supercars at the Circuit of the Americas in 2013

New Zealand is set to remain V8 Supercars’ only international fixture next season, with the category now focussing its overseas ambitions on a 2016 push into Asia.

This year sees the championship without a race outside of Australasia for just the second time since 2004 following the pausing of its five-year contract with the Circuit of the Americas in Austin, Texas.

V8 Supercars has spent much of this year trying to reduce expenses borne by the COTA to host the series; searching for a second event in North America in which to share transport costs while also analysing its total freight requirements.

Despite the efforts, hopes of a return to Austin are understood to have faded ahead of the championship’s 2015 calendar reveal in September.

“We’ll announce it around the time of our calendar,” V8 Supercars CEO James Warburton told Speedcafe.com when quizzed on the current status of the COTA event.

“What we’ll do is put the best calendar we can forward.”

Warburton meanwhile confirmed that efforts to expand into Asia are focussed on 2016 and beyond.

The former television executive has repeatedly stressed a desire to create “sustainable, long term international events” since taking over the role of V8 Supercars CEO midway through last year.

While previous sojourns to China, Bahrain, the United Arab Emirates and the United States have been strong profit-earners for the category, none of the contracts have run their full course due to the expense for promoters.

“It is a core belief of the business that it is important, but it’s got to be right for our viewers back home and also for the championship,” Warburton continued of overseas races.

“Without a doubt Asia is the most important region.

“For time zone and for relevance for local fans it makes sense.”

In addition to its favourable timezone for live television, Asia promises far cheaper transport costs than that to the USA, both due to proximity and the regularity of scheduled freight services.

The category remains a challenging freight proposition, with teams having rejected efforts to trim down their equipment levels in order to fit into a single 747.

“Rationalising to one plane is quite easy but with the amount of offload we would need on other services it’s uneconomic, so we are better to continue with the freight model of two 747s.

“Duplicating what we do in terms of overall vehicles through to data trolleys and whatever else (to send via sea freight) is obviously cost prohibitive.

“(But) you look at Asia and the freight to Asia is dramatically cheaper because of the routes and the regularity of freight.”

The 2015 calendar is meanwhile expected to closely resemble this year’s 14-event schedule.

Symmons Plains is currently the key unknown, with negotiations between V8 Supercars and the Tasmanian government of the circuit’s facilities continuing ahead of a new deal being struck.