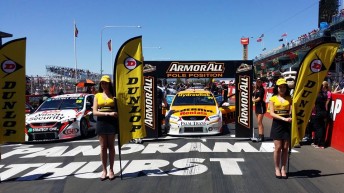 The Bathurst round of the Dunlop Series will feature a single 250km race this season, V8 Supercars has announced.

The twin 40 minute race format has been dropped in favour of a single mini-enduro, which will see teams allowed to compete with or without co-drivers.

The race will run on Saturday afternoon, leading into the evening’s Top 10 Shootout for the Supercheap Auto Bathurst 1000.

The change follows the shooting down of a proposal to allow Dunlop Series cars in the main race as wildcards.

Bathurst marks the sixth round of the 2014 Dunlop Series, which is currently being led by Ashley Walsh heading into the fifth round at Queensland Raceway this weekend.

The second-tier V8 Supercars class previously ran a single-race format at Bathurst between 2001 and 2004 when it was a non-points paying event.

Each of those five races were held over just 150km, ensuring teams did not have to gear up for tyre and fuel stops, which they will need to do under the new format.