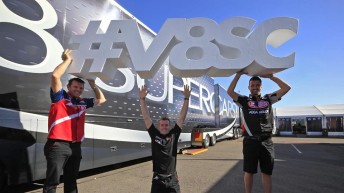 A fresh title for V8 Supercars is being considered in time for the start of the new media rights contract next season.

As V8 Supercars continues to evaluable its future technical direction and a possible move away from V8 engines, the use of the word V8 could be dropped.

In what would be the most significant branding change since the name V8 Supercars was launched in 1997, the sport’s chief executive James Warburton confirmed a possible switch is possibility for next year.

“As I said there’s no sacred cows. It’s on the table as we speak,” Warburton told Speedcafe.com

“We haven’t made a determination.

“But the reality is we’ve got the greatest opportunity we’ve had for some time in terms of profile, elevation of status etc.”

Warburton indicated that if there were to be a title change it would be ideal to transition as the fresh $241million media rights deal between pay operator Foxtel and Network 10 commences at the beginning of 2015.

“Come next year we’ve got the opportunity, when we move to the new media partnership with Fox Sports, Channel 10 and Foxtel to make a big brand change,” he said of the new six-year broadcast deal.

“It’s really hard to determine what’s right so if anything changes it will be next year.

“If you do it in June you’ve missed that opportunity… but we haven’t decided.

“Yes, it is (brand change) a possibility for next year.”

Just last month Warburton said different engine configurations are being looked at for the championship as soon as 2017.

Commercially, V8 Supercars admits it has endured a period of tremendous challenge, yet it remains in talks with several companies over series title sponsorship.

An outright primary title sponsor has not been seen in the championship since Shell back in 2001.

“There are plenty of companies we are talking to,” Warburton began.

“I think you’ve got to remember really what this commercial team has changed in terms of our sales division has renewed pretty much every major sponsor.

“We are kind of tapped out if you like from the automotive side of the business.

“So really it is about bringing on that next tier and that next level and competing against the major football codes in bringing someone in.

“We’ve had an extraordinary amount of conversations. A lot of them are education.

“People don’t understand how big we are as a championship and what we stand for.”

There also remains a vacancy for the naming rights sponsor for the penultimate round at Phillip Island from November 14-16 following the collapse of Sargent Security.