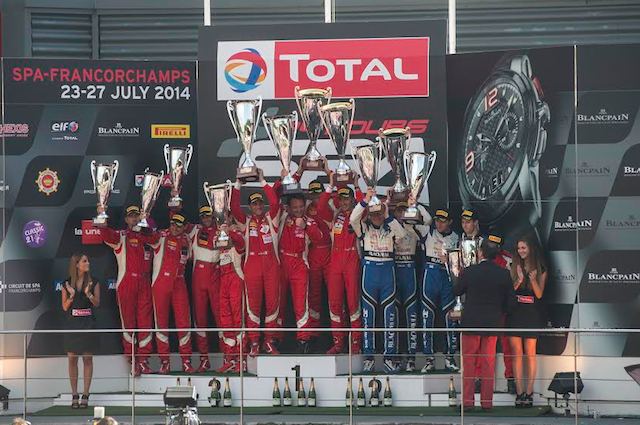 Craig Lowndes has described his exhaustion after ending a rookie Spa 24 Hours appearance on the Pro-Am class podium.

The 40-year-old combined with countryman Steve Wyatt and Italians Andrea Piccini and Michele Rugolo to finish third in the Pro-Am Class of the Blancpain Series event.

The quartet also chalked up eighth outright among the 61-car field in their AF Corse Ferrari.

The race saw Lowndes complete three stints during the night as well as one in the early morning, before returning to the car for the final run to the chequered flag.

Unused to the challenge of twice-around-the-clock races, the V8 Supercars regular estimated that he’d slept for just three hours between the green light and the chequered flag.

“At the beginning I was full of enthusiasm and excitement, just wanting to get involved and get going,” he said post-race.

“Now that we’re at the other end of the 24 Hours I’m still excited, understanding what we’ve achieved and what we’ve been through, but I’m knackered. Sleep is in order.

“It’s been a humongous experience for me to be able to come to Spa and drive with this team and have a podium.

“We were hoping to be on the podium but it was unexpected and really for us, like everyone else we had a few issues throughout the race, but all in all it was a huge experience and I’d love to come back.”

Lowndes noted the passion of the Italian AF Corse crew, which prepared four Pro-Am and two Gentlemen Trophy cars for the event.

“When you’ve got a team like AF Corse that’s got multiple cars here with probably sixty or seventy people working on the ground, you win and lose as a team,” he said.

“It’s fantastic. That’s the buzz that you get out of motorsport.”

Lowndes’ appearance at Spa came after an attempt to enter the Le Mans 24 Hours with the team fell over.

Again left to wait for the scheduled September reveal of the V8 Supercars calendar in order to assess possibilities for 2015, Lowndes will almost certainly push for a start in the French classic if a date clash is avoided. 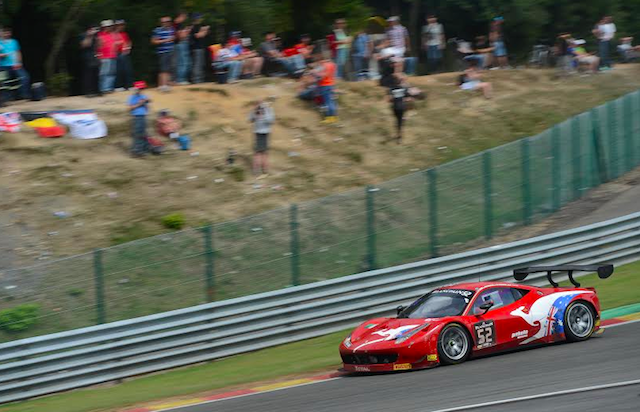 Lowndes was impressed by the passion of the AF Corse crew

Meanwhile, the highly publicised scheduling conflict between next year’s V8 Supercars pre-season test and the Bathurst 12 Hour looks set to deny Lowndes of defending his 2014 win in the local GT3 event.

The Red Bull star won this year’s Bathurst 12 Hour on debut for Maranello Motorsport after three years in Audi R8s, paving the way for his link with AF Corse.

The five-time Bathurst 1000 winner says that V8 Supercars’ move to put its test day up against the 12 Hour was a topic of conversation in the paddock at Spa.

“The news has touched this side of the world as well,” Lowndes told Radio LeMans during the weekend’s race.

“I’ve had people from Audi and other manufacturers that take interest in the 12 Hour ask questions about it.

“The unfortunate thing is that the test day is on the Saturday, but they’ve made it mandatory for a media day on the Sunday, which is what stops us going back to do the race itself.

“There’s a bit of pressure on both V8 Supercars and the Bathurst 12 Hour to try and resolve something because there are a dozen or more drivers that cross over (between the categories).

“At this stage we can’t do it next year but hopefully the powers that be have a bit of common sense, which sometimes doesn’t prevail, and realise that there is pressure around the world to free that up.”

The veteran spoke enthusiastically about the Bathurst event and the growing popularity of the GT3 formula in Australia.

“Every year it’s growing and developing, including the crowds,” he said of the 12 Hour.

“Australians are understanding what GT3 cars are all about and they love it.

“Whether you’ve got cars that are quick in a straightline or cars that are good through corners, you’ve got a great mix that makes for great racing and I think that’s what fans in Australia want to see.

“It’s not necessarily about what category is there, they just want to see some great racing with great drivers.”