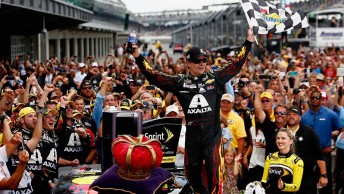 Gordon celebrates his fifth win at the ‘Brickyard’

Jeff Gordon won the first Brickyard 400 in 1994, now he has his fifth after taking victory in the 21st edition at Indianapolis.

In a case of what was meant to be, the Mayor of Indianapolis declared prior to the race that it was “Jeff Gordon Day” in the city and he delivered.

He is the most successful NASCAR driver at Indy and ties him with Michael Schumacher whose five F1 wins is considered the gold standard at the track.

Gordon set up the win when he won the final restart from the outside to pass Hendrick Motorsports teammate Kasey Kahne with 17 laps remaining.

“I don’t think there is a greater feeling for a race car driver than to have a great team because that is what it took today,” said Gordon.

“I’m not very good on re-starts, but I made the re-start of my life today when it countered the most. I knew we had a great race car today and just needed to get out in front.

“It is such a big race, such an important victory, crucial moment in the season and championship, so it’s clearly an emotional moment. We got number five!”

By the finish it was Kyle Busch in second while Kahne slipped back to sixth.

Australia’s Marcos Ambrose finished the race in 22nd after he was forced to start off the back following a transmission change prior to the green flag. Ambrose who is still in with a fighting chance to make the Chase for the Cup, no doubt pleased that Gordon took his second win of the season, and not one of the drivers, like him, who are looking for a victory to lock themselves into NASCAR’s version of the playoffs.

The big news prior to the green flag was that Roush Fenway Racing confirmed that Edwards will not be back with the Ford outfit in 2015. Although it has not been confirmed where Edwards will be heading, it is widely tipped that he will join former team-mate Matt Kenseth along with Kyle Busch and Denny Hamlin at Joe Gibbs Racing aboard a Toyota. Roush Fenway meanwhile has confirmed that it will field entries for Greg Biffle, Ricky Stenhouse Jr. and Trevor Bayne.