Dick Johnson Racing has revealed the retro livery that its #17 David Wall/Steven Johnson entry will campaign at this year’s Supercheap Auto Bathurst 1000.

As reported by Speedcafe.com earlier this week, the scheme has been reborn to celebrate the 20th anniversary of Dick Johnson and John Bowe’s victory in the 1994 Great Race.

The retro look was shown off to fans at a packed DJR workshop open day, attended by both Johnson and Bowe.

The duo both hail the 1994 race as one of their best, with Bowe having defeated rookie Craig Lowndes’ Holden Racing Team Commodore in an intense late-race battle.

“In my mind there’s no question this was my best win there, and I know it’s the one I’ll remember as being something very special,” said Johnson in the immediate aftermath of the race.

“I always felt we had the fastest car out there and the best overall package, but in the wet opening stages we couldn’t show the legs we knew we had.

Added Bowe at the time: “This year we really had it right. What a race..what a result!

“We could not have picked a better race to win. I have been with Dick for seven years now and this win stands out as something special, the best ever.”

The squad celebrated Johnson’s legendary Tru-Blu XD Falcons during the 50 years of Bathurst festivities in 2012, while last year saw the marking of 30 years since the veteran’s frightening Hardies Heroes crash in the first Greens’-Tuf XE.

As was the case with Tru-Blu and Greens’-Tuf, the retro Shell livery retains the branding of the team’s current primary sponsors Wilson Security and Payce Consolidated.

The squad’s #16 Scott Pye/Ash Walsh Falcon will compete at Bathurst in its regular green and white Wilson Security colours. 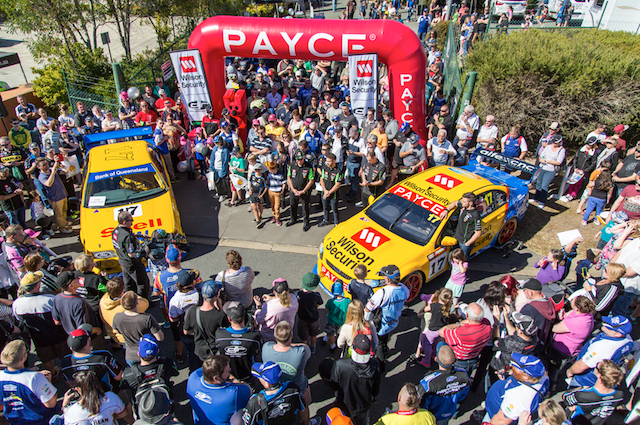 The retro scheme was unveiled at a packed DJR open day