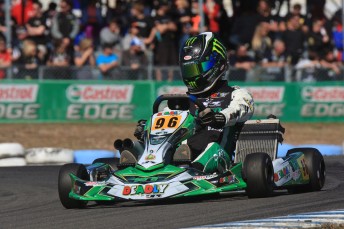 David Sera has positioned himself for a last round showdown with Castrol EDGE CIK Stars of Karting KZ2 Championship leader Joey Hanssen after a dominant performance at the penultimate round in Newcastle.

Sera was in ominous form, qualifying on pole and then winning every race he entered for a maximum round score, setting up a grandstand finish at his home track – Todd Road in Melbourne – over the weekend of September 20-21.

The first final was a canter for the Deadly Kart driver. He won by a considerable margin from Queenslander Kyle Ensbey (Maranello) and Hanssen (CRG).

After one of the toughest weekends he’s seen in Castrol EDGE KZ2 competition, Hanssen mustered a third in final one and then came home sixth. The battle for the podium placings in the race saw Chris Hays come home second with Kel Treseder holding off a spirited Matthew Wall.

Victorian Aaron Cameron (Arrow) had a breakthrough victory in the elite junior category, KF3. He took both finals today becoming the first driver since Jayden Ojeda (Exprit) at round one this year to achieve that feat.

He was pushed all the way by the winner of the last two rounds of the Championship, Zane Morse (Tony Kart).

After finishing second in final one, Ojeda had a first turn coming together in the second final which dropped him down the order. Showing true Championship quality, the Sydney-sider fought back to finish fifth.

Finishing third, Ojeda’s strongest challenger for the Title, Bryce Fullwood was able to close the gap, albeit by just four points.

The Title battle in KF2 is even closer, just as today’s racing was. Nathan Tigani took out the opening final to bring himself to within four points of Championship leader coming into the weekend, Troy Loeskow.

Loeskow bounced back in the second final in emphatic fashion, stalking early leader Tigani and then moving to the lead before pulling away out in front. In the end, the gap was 2.665 seconds. He also was awarded the Franco Guaitoli Memorial Shield.

Just a handful of points separate Loeskow and Tigani heading to Melbourne.

On-demand coverage of every race from today will be available at www.speedcafe.com/kartinglive/.

The next and final round of the Castrol EDGE CIK Stars of Karting will be conducted at Todd Road in Melbourne over the weekend of September 20-21.