Petty: Ambrose must decide on future

Petty: Ambrose must decide on future 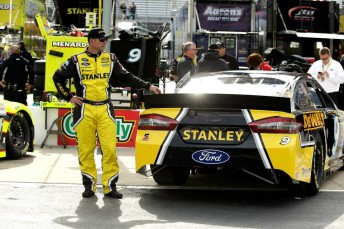 Richard Petty says Ambrose will decide his own future with RPM

NASCAR legend Richard Petty has floated the possibility of Marcos Ambrose running a part-time program in the United States next season as he waits for notice on the Australian’s 2015 plans.

The 37-year-old Ambrose has been linked to Team Penske’s potential V8 Supercars effort since news of the US giant’s interest in the Australian championship broke late last year.

As outlined on Friday, Ambrose is understood to have made preliminary preparations to return home to Australia but, along with Dick Johnson Racing and V8 Supercars itself, he is awaiting confirmation of whether a Penske V8 effort will go ahead.

The former two-time V8 Supercars champion has long stated a desire to one-day move his young family back to Australia, while he is also said to have grown frustrated running mid-pack in NASCAR against far bigger budget teams.

Refusing to discuss his future with reporters at Indianapolis ahead of the Brickyard 400, Ambrose had reiterated as recently as last weekend that he will do what is “best for RPM”.

“I’m not really thinking about myself here, I just want the best for RPM,” he said.

“They have decisions to make along the way here. I want to help them make their decisions and be where they want to be.

“I haven’t really thought about anything much but that. I want to make sure that RPM are on the right path and I’m going to do everything I can to make sure I help them do that.”

Petty, however, has stressed at Indy that the Australian will decide his own future, suggesting that a part-time program might be an option if his driver does not want to commit to another full season.

“It’s probably up to him as much as anything,” said Petty.

“He’s been good for Richard Petty Motorsports. We admire what he’s been doing for us.

RPM is yet to confirm a manufacturer deal for next year, although despite meetings with Toyota, is expected to continue with Ford and its Roush-Yates technical alliance.

He has finished each of his five previous full-time Sprint Cup campaigns between 18th and 26th in the standings.