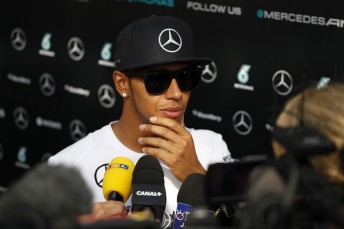 Lewis Hamilton has bounced back from a problematic German campaign by leaping to the top in the opening practice sessions for the Hungarian Grand Prix.

Hamilton showed the Mercedes dominance on both the medium and soft compound Pirelli tyres during the second 90-minute free practice session.

After Red Bull briefly held the top two times, Hamilton posted a 1:24.482s at the high downforce Hungaroring which was almost 1.5s quicker than the time he set in opening practice.

Although the pace of the Mercedes was clear, Hamilton remained unhappy with the performance of the brakes, voicing his concern to the team during the session.

In the wake of Hamilton’s heavy shunt in qualifying at Hockenheim, the team launched an investigation into the brake failure.

In a brief statement released soon after second practice, Mercedes said there is no clear evidence indicating the cause of the failure.

“There is currently no clear evidence of a single cause of failure and our continuing rigorous analysis will take into account multiple factors which could have contributed to the incident,” the statement said.

“The results of this technical analysis will be communicated as soon as they are available.

“Formula 1 is a domain of advanced development where technologies are pushed to their limits and in which strong partnerships are crucially important.

Championship leader Nico Rosberg was second fastest in both sessions.

In the final run Rosberg was .23s slower than Hamilton with Red Bull ace Sebastian Vettel .62s off the top time.

Australia’s Daniel Ricciardo was 1.5s off in seventh place as Ferrari’s Fernando Alonso and Kimi Raikkonen took fourth and sixth, either side of McLaren’s Kevin Magnussen.