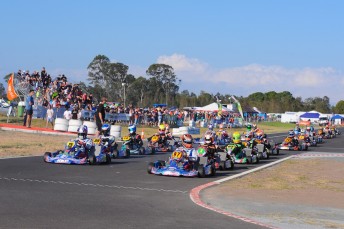 As per the 2013 event, entries will be on an invitational basis to attract the best drivers. Pic: AF Images

A number of well credentialed international drivers have shown interest in the Race of Stars karting event to be held on the Gold Coast on October 18.

Last year’s inaugural event was a huge success and organisers are anticipating that to be bolstered come October.

Held at the Xtreme Karting complex at Pimpama, the 2014 event will be conducted on a new layout. The Gold Coast facility sees some of the highest speeds in Australian karting, with the six-speed gearbox KZ2 karts approaching 160kph millimetres from the ground on the back straight.

Once again, Race of Stars will form part of the V8 Superfest, which culminates with the Castrol EDGE Gold Coast 600 for V8 Supercars.

“Last year’s event was an enormous success, everyone who was in attendance was amazed by the atmosphere and excitement that was produced,” said Karting Australia’s Chief Executive Officer Kelvin O’Reilly.

“The involvement and support of V8 Supercars is tremendous for the sport of karting and as a governing body we’re excited about the continued potential of this event.”

Event coordinator Lee Hanatschek indicated that it’s not just Australia’s best drivers, but also a number of the biggest names in the karting community throughout Europe that is being targeted to attend the 2014 event.

“This event has been designed as a true showcase for the sport of karting,” said Hanatschek.

“It will once again be a one day event being held on a layout that no one has competed on before, which is set to make it a very even playing field for everyone involved as it will not be about who can do the most test days and get to know the circuit the best.

“Over the coming weeks, we’re aiming to finalise the arrangements with a number of high-quality International drivers who will be competing.”

“People are still coming to our facility and speaking about how good last year’s event was, now we’re delighted to be able to officially say it’s coming back in 2014,” said Holm.

“Last year was the first time we’d held such an event here at Xtreme Karting and while it was an enormous success we’ve already been planning on making the 2014 Race of Stars an even bigger spectacle.”

This weekend, Australia’s best karters will be taking part in the penultimate round of the Castrol EDGE CIK Stars of Karting Championship in Newcastle.

A live preview show Saturday evening at 5:30pm and all of Sunday’s action can be seen live and exclusive on Speedcafe.com.