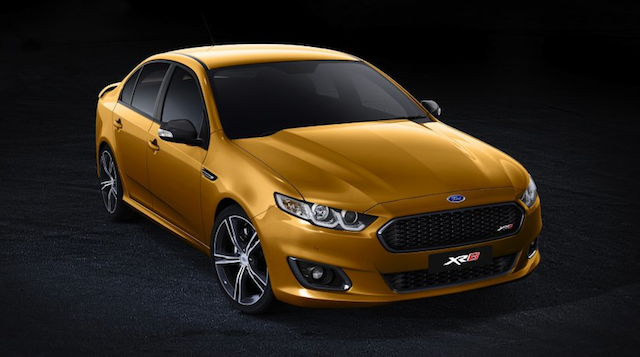 An official image of the final Ford Falcon XR8

Ford Australia has released the first official images of its final Falcon update amid growing expectations that it will be seen in the V8 Supercars Championship next season.

The face-lifted model will go on sale in December and is expected to be produced until the closure of local Ford manufacturing in October, 2016.

The final Falcon will see a return of the XR8 nameplate for the first time in four years, which coincides with the early axing of the company’s Ford Performance Vehicles arm.

Ford has yet to confirm its future in V8 Supercars beyond the end of 2014, recently stating that it will not publicly declare its position until towards the end of the season.

Although much speculation has centred around possible moves to a Mondeo or even Mustang racing program in the future, updating its current Falcon bodywork appears the most likely short-term option.

Moving to the new bodywork would allow FPR to re-homolgate its much-maligned current FG aerodynamic package, which was controversially trimmed of rear downforce ahead of the 2013 season.

V8 Supercars has been reviewing its aerodynamic parity testing procedures since March and will undertake more straightline running with its current Ford and Holden prototype cars next month.

The testing will be completed in an attempt to improve its methods ahead of future homologations.

The running had initially been scheduled to take place post-Townsville, but was delayed following the arrival of David Stuart into the role of category sporting and technical director.

FPR has played a key part in the review of V8 Supercars’ open-air testing, submitting its own recommendations to the category’s aerodynamic working group. The final Falcon in XR6 form