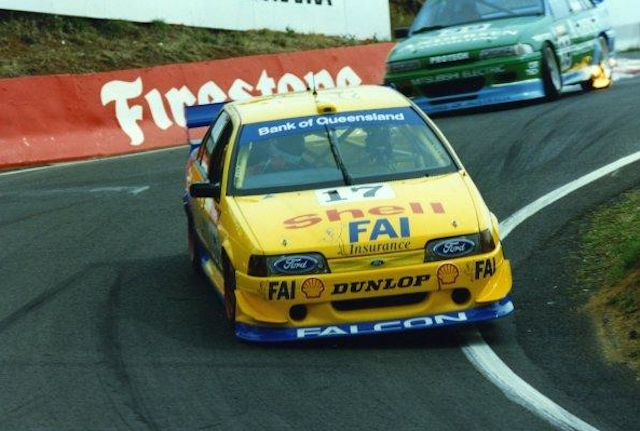 Dick Johnson Racing is set to continue its run of retro liveries at the Supercheap Auto Bathurst 1000 this October.

Speedcafe.com has learned that the famed Queensland-based squad is planning a Shell tribute livery for this year’s race.

It is expected that the scheme will celebrate 20 years since the 1994 Bathurst 1000, where Dick Johnson teamed with John Bowe to take his third and final Great Race victory.

The move will follow the Tru-Blu and Greens’-Tuf retro liveries campaigned by the team in the 2012 and 2013 Bathurst 1000s respectively.

As was the case for the last two years, the livery change will likely take place only on the #17 entry, to be campaigned by David Wall and Steven Johnson. DJR will hold its annual open day for fans this Sunday

Although Shell is currently a minor sponsor of DJR, the tribute livery is expected to retain primary branding from the team’s current primary backers Wilson Security and Payce Consolidated.

Confirmation of the plan is scheduled to take place at the team’s workshop open day this Sunday.

Johnson and Bowe are both slated to attend the event, for which a digital promotional poster distributed by DJR promises a ‘special team announcement’.

A DJR spokesman could not confirm the livery change when approached by Speedcafe.com, but threw forward to an endurance-related announcement taking place ahead of the August 1-3 Coates Hire Ipswich 300.

“No endurance plans, other than co-drivers, will be announced until the week prior to Queensland Raceway,” said the spokesman.

Johnson and Bowe will be joined by the team’s regular drivers Wall and Scott Pye and their respective endurance partners Steven Johnson and Ash Walsh at the annual fan open day.

The team is also promising access to its workshop and museum, as well as car club displays and a range of other family-oriented activities.

DJR will today enjoy its first private test of the season at Queensland Racway, where it is joined on track by Erebus Motorsport.

Erebus is meanwhile undertaking its second test of the year and will evaluate its engine upgrade package ahead of a scheduled debut at the Coates Hire Ipswich 400.

VIDEO: John Bowe battles with Craig Lowndes in the closing stages of Bathurst 1994