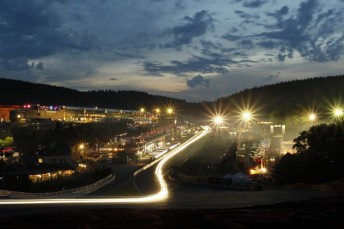 Ten Australasian drivers will be in action at Spa

The 35-year-old Bell and 38-year-old Mullen are both well accustomed to McLaren machinery, teaming up for Spa last year in a Gulf Racing MP4-12C.

Confirmation of Mullen’s place in the squad comes via the release of the race’s full 61 car entry list.

The #101 Von Ryan Racing entry is a one-off for Spa and will be pitted against 17 others in the Pro Cup class.

The majority of the 10 Australasian drivers competing will race in the second-tier Pro-Am Cup. Kiwi Chris van der Drift will also be in action, teaming with Lebanese pair Alex Demirdjian and Shahan Sarkissian and a yet-to-be-named fourth driver in a Boutsen Ginion entered McLaren.

Many of the international runners will meanwhile be familiar to Australian fans having competed in this year’s Bathurst 12 Hour.

Including the Australasians, a total of 23 drivers will complete the Bathurst/Spa double.

Free practice will get underway on Thursday at Spa ahead of final qualifying on Friday and the race start on Saturday.