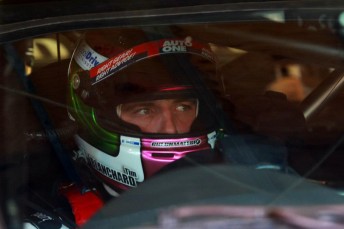 Tim Blanchard has emerged as a contender for one of the few remaining Pirtek Enduro Cup seats after testing Lucas Dumbrell Motorsport’s Holden.

The 27-year-old cut laps in the #23 Repair Management Australia Commodore at Winton on Monday, where the team was completing its second private test of the season with regular driver Russell Ingall.

The LDM Holden is one of just two full-time V8 Supercars Championship entries without a confirmed co-driver for the Sandown, Bathurst and Gold Coast races.

Dumbrell, who was unable to be contacted by Speedcafe.com in the wake of the test, had suggested in Townsville that he hoped to have a driver locked away over the coming weeks.

It is understood that Dumbrell remains in talks with several drivers about the seat, including Blanchard and Carrera Cup front-runner Michael Patrizi.

The team is also known to have spoken to several international drivers throughout the year, utilising Ingall’s extensive array of contacts.

Blanchard has been without a full-time drive in any category this year after being replaced by David Wall at Dick Johnson Racing following the 2013 season. 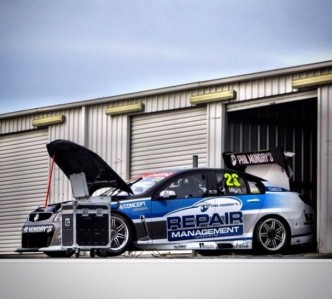 LDM’s Holden at Winton on Monday

Brad Jones Racing’s Dale Wood-driven entry is the only other full-time V8 Supercar without a confirmed co-driver.

The squad’s Dunlop Series driver Chris Pither is widely expected to take the position for a third consecutive year.

The Kiwi drove the #21 Commodore during the team’s Winton test on June 2nd, but stuck to his own car yesterday.

Andre Heimgartner is expected to get the call-up to lead the Bathurst-only Super Black effort, while Dragon confirmed to Speedcafe.com last week that Kristian Lindbom will steer its primary entry at both Sandown and Bathurst.

Dragon tested its PWR-built Dunlop Series car at Winton on Monday, with Improved Production regular Ben Schoots and historic sportscar racer Michael Gibson both getting behind the wheel.

Schoots will drive the car at the next event of the second-tier series at Queensland Raceway and the following round at Bathurst but, along with Gibson, is not expected to figure in the team’s wildcard plans.

** Sandown and Bathurst entry only