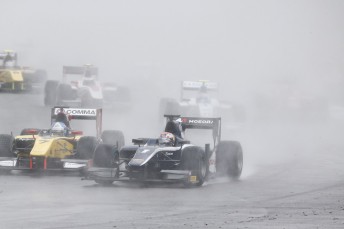 A heavy downpour just before the start of the 26 lap race doused the German Grand Prix circuit and created a dilemma about tyre selection for the 26 drivers and their frantic teams.

The Russian Time team opted to start Evans on wet tyres while a few brave gamblers decided to risk starting on slicks.

Those choices defined the eventual outcome in a race of fast changing fortunes.

Stefano Coletti and Williams test driver Felipe Nasr were among the few drivers to take a gamble on slicks, and their decision paid off when the pair finished one-two ahead of McLaren test driver Stoffel Vandoorne.

A charge straight down the middle of the track had Evans into second place before the first corner and after an early Safety Car delay, the New Zealander passed Frenchman Nathanael Berthon for the lead.

However it quickly changed.

“My pace was good at the start and the car felt good for the first few laps,” Evans said.

“Then I started to lose grip and struggle for traction. It had been hard for the engineers to pick the settings in the wet conditions.

“Our tyres pressures went too high and I was soon falling back.” 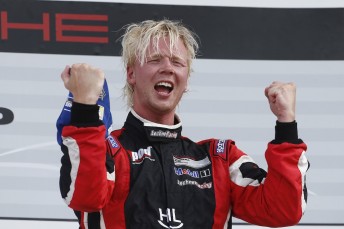 The GP2 series now moves to Hungary for round seven next weekend.

Nicki Thiim took the fifth round of the Porsche Mobil 1 Supercup at Hockenheim.

“Finally I’m back at the top of the podium. I’m going to enjoy my win today,” Thiim said.

Dempsey said: “I very much enjoyed my visit to Hockenheim. I experienced many new things like my first standing start and the 911 GT3 Cup.

“Competing in the number 911 car was cool. Everyone was so friendly and I had a great time on the track. I hope I get another chance to contest the Supercup.”

Rainfall in the morning at Hockenheim left some passages of the 4.578km circuit damp when the Supercup field took off into round five of the championship.

Taking up the race from pole position, Thiim initially lost the lead to Estre, but the reigning Supercup champion reclaimed the front spot in lap two at the wheel of his GT3 Cup car, with Bamber close on his heels.

Bamber is second on the points table on 71, just four behind Kuba Giermaziak.

The German round of the Porsche Mobil 1 Supercup marks the halfway point in the season with the series now moving to Hungary this weekend. 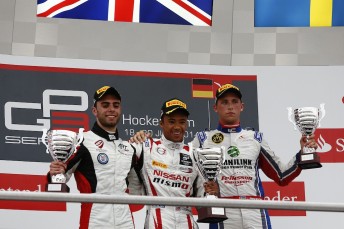 The Arden International driver made a good clean start with Zamparelli stealing a position from Eriksson to sneak into second.

Series leader and fellow Brit Alex Lynn was also on the move and he was up to fourth, demoting Nick Yelloly (Status Grand Prix).

There was contact on lap one between Sebastian Balthasar (Hilmer Motorsport) and Pal Varhaug (Jenzer Motorsport), the Norwegian driver having to retire from damage sustained in the incident.

Mardenborough held an advantage of just under a second to Zamparelli, with a small gap forming back to Eriksson in third.

At the midway point of the race, Mardenborough increased his lead at the front to 2.5s, driving a calm race.

Lynn remains on top in the Drivers’ standings on 112 points with Eriksson closing the gap marginally on 94.

Kirchhofer, Bernstorff and Kiwi Richie Stanaway complete the top five on 80, 73 and 69 respectively.

Carlin holds the lead in the Teams’ standings on an impressive 189 points with ART Grand Prix rising to P2 on 125 points, two points ahead of the third placed team Status Grand Prix.

The GP3 Series continues at the Hungaroring this weekend.

Hong Kong-based Craft-Bamboo Racing overcame a sticking throttle to claim maximum points in the 3 Hours of Inje in South Korea.

The team’s #77 Ligier JS-53 Evo CN Prototype started the race third on the grid, first in class, on a hot Sunday afternoon with Kevin Tse taking the starting duties.

Tse then handed the car over to Frank Yu (HKG) for the second stint, then to Mathias Beche (SUI) before getting back into the car for the final stint, bringing the car home for the team.

The race started well with Tse improving his time at every lap but as track temperatures began to soar, lap times started to increase due to downshift blip issue.

Tse came in for a slightly earlier pit-stop to refuel and hand over the car to Yu.

After fixing a sticking throttle mid-race, Yu took the car out for a 45 minute stint where he posted some quick times despite being bogged down by traffic from the faster LMPs and the slower GTs.

Yu also battled the heat as he drove during the hottest time of the day. Tse eventually took over from Beche to finish the race for the team.

The Asian Le Mans Series continues at the end of August when it heads to Fuji Speedway for the second of five races in the 2014 season.

Father and son duo David and Sam Brabham scored a pair of top five finishes during a one-off guest appearance in the Radical SR3 Challenge at Snetterton.

Driving together for the first time, the pair struggled for speed in qualifying, with the teenager proving quicker than his former Le Mans winning father on the way to ninth fastest.

The guest stars went on to record third and fifth place finishes in the two co-driver races.

Adelaide’s Richie Crampton bowed out in the second round of the Mile High NHRA Nationals in Denver.

After qualifying 12th, he knocked out heavy hitter, Shawn Langdon in round one and then was bumped out by Bob Vandergriff. He in turn was eliminated by Brittany Force who went on to finish runner up to JR Todd.

In Funny Car, it was an all John Force Racing Final when Robert Hight’s Auto Club Mustang beat home the boss, John Force in the Castrol GTX High Mileage Ford.