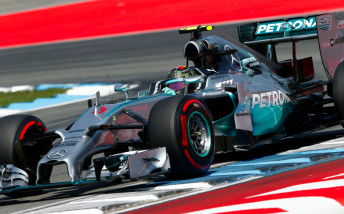 Nico Rosberg cruised to victory in his home grand prix

Nico Rosberg extended his world championship lead with a dominant victory from pole position in the German Grand Prix at Hockenheim.

The local hero led every one of the 67 laps, stamping home his advantage by setting the fastest lap on the final tour.

The pair were more than 20 seconds adrift of Rosberg at the flag, with Hamilton having charged through from 20th on the grid following a brake failure in qualifying.

Hamilton’s podium also came despite a mid-race clash with Jenson Button that damaged the front-wing of the Mercedes and forced a switch to a three-stop strategy.

Sebastian Vettel and Fernando Alonso finished fourth and fifth respectively after dicing with each other for much of the race.

The Ferrari driver was forced to battle Vettel’s Red Bull team-mate Daniel Riccairdo in the closing stages thanks to a late third stop, however, eventually taking the flag less than 0.1s ahead of the Australian.

Ricciardo had fallen from fifth to 14th at the first corner as he ran wide to avoid a clash between Felipe Massa and Kevin Magnussen in front of him.

Magnussen had made an impressive start from fourth and was down the inside of Massa at the first corner when the Williams driver turned in.

Sergio Perez completed the top 10 having survived contact with Daniil Kvyat during the first stint that sent the Toro Rosso into a spin.

The Russian’s race eventually came to an end when a spectacular fire forced him to pull off in the Turn 4 run-off with 23 laps remaining.

Although the German’s car was left stricken across the circuit, race officials elected to recover the car under local yellows.

Rosberg’s championship lead over team-mate Hamilton has grown by 10 points to 14 ahead of the Hungarian Grand Prix next weekend.