Formula 3 to skip Bathurst Festival in 2015

Formula 3 to skip Bathurst Festival in 2015 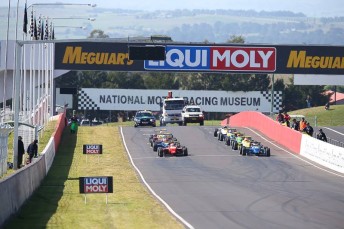 Australia’s fastest racing cars will be absent from the country’s premier circuit next year, with Formula 3 opting out of a return to the Bathurst Motor Festival.

Category manager Ian Richards has cited a lack of track time at the busy Easter meeting as the reason for the absence.

F3 has starred at the event in each of the last three years, with the outright race lap record falling on each occasion.

The current marker, set by Simon Hodge, sits at 2:02.67s and will now likely stand until at least Easter 2016, when F3 is hopeful of a return to the event.

“It took a lot of work to give people confidence that Formula 3 could actually compete at Mount Panorama, full stop, and we’re pleased to have been able to showcase what the fastest cars in the country are capable of there across the last three years at the Bathurst Motor Festival,” said Richards in a statement.

“Because of the very busy program proposed for the 2015 event it is apparent that there would be insufficient track time available for The F3 Australian Drivers Championship Sporting Regulations to be complied with, as required by CAMS.

“We look forward to returning to the Mountain in 2016.”

By its nature as a public road, Bathurst is traditionally an expensive venue for national level competitors, leaving it well suited to categories that can amortise costs over large grid numbers.

The BMF has today confirmed the seven categories that will compete at its event next year.

As previously reported, the Heritage Touring Cars will headline the meeting, marking the first time that the Group A and C machinery has appeared at Mount Panorama since the 2011 Bathurst 12 Hour.

The category is promising a 55 car grid in what will be the highlight of its 2015 schedule.

A ‘combined sedans’ category has also been added to the program, organised by the New South Wales Road Racing Club, which has previously fielded its own regularity at the BMF.

“We are pleased to continue to give opportunities to categories who otherwise might not get to ever compete at Mount Panorama,” said event promoter James O’Brien of the 2015 line-up.

“We look at the program each year and for 2015 have been able to accommodate several racing categories who had expressed an interest in competing at the Event.

“The addition of the Heritage Touring Cars has already generated significant interest and their category management is telling us to expect a full grid, which should be a very impressive sight.

“We are pleased to welcome Saloon Cars back to the program and expand the Production Sports and Production Touring car fields to run more longer-distance races.”

The event will take place over the April 3-5 Easter long weekend.