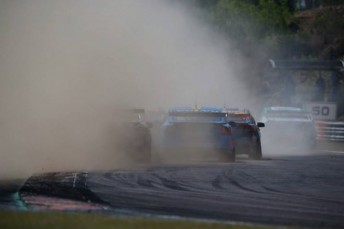 Driving standards were a hot topic at the recent Castrol Townsville 500, where many of the category’s star drivers proved more than willing to rub panels as they fought for position.

Stewards investigated eight instances of car-to-car contact in the opening race alone, which had provided one of the most entertaining first laps in the category’s history.

Although Safety Car periods due to major incidents have been relatively scarce this year, the tight nature of the modern V8 Supercars pack ensures plenty of contact and resulting flared tempers between teams and drivers.

Frustration reached boiling point for Jeld-Wen Ford owner Charlie Schwerkolt in Townsville, where he suggested that Todd Kelly should be benched for a race following contact with Jack Perkins.

The Townsville event meanwhile ended with Garth Tander stating that he had deliberately made minor contact with Whincup in their late battle for the lead in order to “send a message” to the five-time champion and his team.

What do you think? Who is V8 Supercars’ dirtiest driver? Have your say in this week’s Pirtek Poll