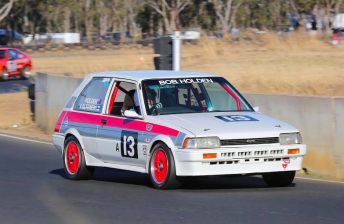 Eighty-one-year-old Bob Holden continues to add to his sizeable trophy collection, winning the Lloyd Bax Trophy as part of the weekend’s Heritage Touring Car round at Morgan Park.

The 1966 Bathurst 500 winner drove his Group A Toyota Corolla to a narrow victory over Frank Binding’s Army Reserve Group C Ford Falcon XD in a thrilling finish to the handicap race.

Holden’s Corolla took the flag just 0.56s ahead of Binding after the veteran missed a gear on the way to the finish line.

Holden was then unable to start the final race of the weekend due to engine problems.

Aside from Race 2, the meeting was dominated by Terry Lawlor and his ex-GIO Nissan GT-R, who took two poles and two race wins.

Lawlor was again too good in the Sunday afternoon finale, with Towe, Douglas, Compton and Mark Taylor’s Commodore rounding out the top five.