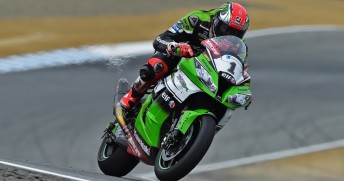 Tom Sykes remains the man to beat in the World Superbike Championship as he secured his fourth pole position of the season at Laguna Seca.

The Kawasaki rider once again showed his class by setting a new lap record at the famous American venue in yet another dominant qualifying display.

Sykes made a slow start to qualifying before posting a 1.21.811s effort which was half a second clear of his nearest rival Sylvain Guintoli.

The Brit’s time shaved eight tenths of a second from the previous lap record at the circuit which would have seen him qualify inside the top 10 on the MotoGP grid last year.

Ducati’s Chaz Davies will start from third having come within four hundredths of a second of Guintoli’s time.

It proved to be a strong day for Ducati with Davide Giugliano heading row two in fourth ahead of Aprilia’s Marco Melandri and Suzuki’s Eugene Laverty.

PATA Honda’s Leon Haslam was seventh just in front of Kawasaki’s Loris Baz. The Frenchman was more than a second shy of his reigning world champion team-mate Sykes.

Spain’s Toni Elias and Northern Ireland’s Jonathan Rea rounded out the top 10, while Niccolo Canepa was the top EVO rider in 12th position for Althea Ducati.

Australia’s Bryan Staring will start from 17th on the grid for IRON BRAIN Kawasaki.