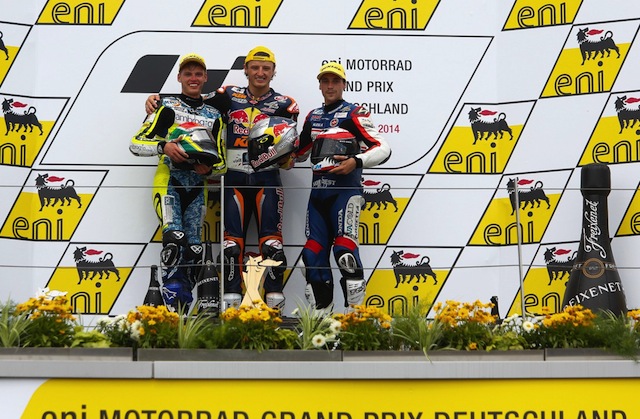 Australia’s Jack Miller has opened up a 19-point lead at the top of the Moto3 standings after recording a thrilling win in the German Grand Prix at Sachsenring.

The Townsville teenager led from start to finish in an incident packed race which saw his title rival Romano Fenati retire in the early stages.

In the end, Miller headed group of five riders in a breakaway before eventually taking the chequered flag by just a tenth of a second from Brad Binder and Alexis Masbou.

“It was a tough race. Brad [Binder] was very strong throughout the race. From the first lap I could see he was going all out, braking like an animal and getting very close to me,” said Miller.

“It was a nice race, but the 27 laps dragged on. Also, the track was more slippery than usual. It was very important to get these 25 points. Now we have to ride intelligently at the next few tracks.”

The young Aussie’s fourth win of the season has seen him equal fellow countryman Tom Phillis who went on to win the then named 125cc class back in 1961.

Miller incurred no problems at the start which allowed him to convert his pole position into a lead.

The Red Bull KTM rider  was unable to relax as a group of four riders formed behind him including Binder, Masbou, Alex Marquez and Danny Kent.

Behind, trouble struck Fenati and Alex Rins as they both took a tumble in the early laps.

At the front Miller controlled the race despite coming under severe pressure and he held his nerve to complete a perfect weekend in Germany.

Miller now leads Marquez by 19 points at the top of the standings heading into the summer break. The Moto3 season continues with a trip to Indianapolis on August 10.